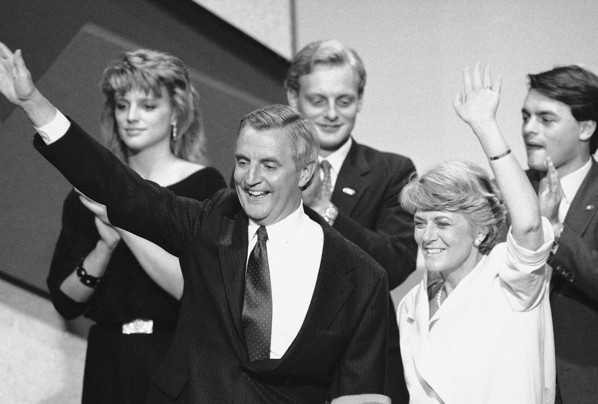 Walter Mondale. Are you excited yet? Many Americans will not recognize his name. He served as Jimmy Carter’s Vice-President from 1977-1981 and was the Democratic nominee for president in in 1984.

You might say that he is charisma challenged. But as best we can tell, there’s no correlation between charisma and intelligence. Walter Mondale had, and still has, some excellent ideas.

George Lakoff has warned progressives and others to not assume that just because something makes sense, then it will be accepted by the American people. What Walter Mondale did in the 1984 campaign is good evidence for Lakoff’s thesis.

On Tax Day, 2011, Mondale penned an op-ed in the Washington Post advancing the reasonable argument that the United States government cannot address its budgetary problems without raising taxes. It included a reflection on personal experience:

I told the truth in 1984. “The American people will have to pay Mr. Reagan’s bills,” I said in my acceptance speech at the Democratic National Convention in San Francisco. “The budget will be squeezed. Taxes will go up. . . . It must be done. Mr. Reagan will raise taxes, and so will I. He won’t tell you. I just did.”

There’s something called a Venn diagram in which two circles intersect. There’s rarely a great deal of overlay between the Republican Party and the truth. So, Ronald Reagan and his cohorts had no difficulty skewering Mondale for respecting and telling the truth. Republicans said that Mondale was just another big-spending Democrat whose views were antithetical to Reagan’s mantra. In his first inaugural address on January 20, 1981, Reagan said, “In this present crisis, government is not the solution to our problem; government is the problem.” (audio clip)

If this sounds familiar, it’s because it is. The words could just as well have come from Paul Ryan, Sarah Palin, John Boehner, Michele Bachmann, or even the Donald. Reaganomics didn’t work in the 1980s; so much so that Reagan somewhat surreptitiously ate his own words and supported the raising of certain taxes in his second term.

Through the lens of 2011, even Reagan’s whiz kid budget director, David Stockman, has fallen off the Reaganomics wagon. In a New York Times op-ed last July 31, Stockman wrote:

If there were such a thing as Chapter 11 for politicians, the Republican push to extend the unaffordable Bush tax cuts would amount to a bankruptcy filing.

Walter Mondale offers words that are both wise and consistent with American thinking (two variables that don’t always overlap):

Taxes reveal who we are as a people and what we value. Polls consistently show that majorities of Americans are willing to pay taxes and even have them increased when the revenues are devoted to their priorities, such as education, health care and deficit reduction. The public’s support is greatest for raising taxes on the affluent, but it extends to hikes tied to popular programs such as Social Security and Medicare.

President Obama’s speech on April 13 on deficit reduction seemed to put would-be progressives back on track with the wisdom of Mondale’s words. First he explains why we need government, and hence taxes:

But there’s always been another thread running through our history -– a belief that we’re all connected, and that there are some things we can only do together, as a nation. We believe, in the words of our first Republican President, Abraham Lincoln, that through government, we should do together what we cannot do as well for ourselves.

Then he addresses a question that seems to have puzzled many Republicans, why taxes should be borne by the wealthy as well as, or more than, people of low or middle incomes.

Now, for much of the last century, our nation found a way to afford these investments and priorities with the taxes paid by its citizens. As a country that values fairness, wealthier individuals have traditionally borne a greater share of this burden than the middle class or those less fortunate. Everybody pays, but the wealthier have borne a little more. This is not because we begrudge those who’ve done well -– we rightly celebrate their success. Instead, it’s a basic reflection of our belief that those who’ve benefited most from our way of life can afford to give back a little bit more. Moreover, this belief hasn’t hindered the success of those at the top of the income scale. They continue to do better and better with each passing year.

Back in 1984, Mondale had the temerity to tell the truth and state that the American economy was in need of revenue enhancements; i.e. tax increases. His reasoning did not prevail in part because most people can readily understand the need for a reduction of taxes, but their critical thinking skills tend to diminish when there is a need for an increase in taxes. It’s called self-interest, and that wasn’t working in Mondale’s favor.

Additionally Mondale was on the short end of a “charisma gap” with Reagan. The former actor and governor of California may have naturally been affable, but his handlers ensured that virtually everything he did was rehearsed. Mondale might have been able to take on “Reagan untethered,” but not “Reagan packaged.”

For all the recent but decreasing criticism of Barack Obama, no one has said that he has not maintained his charisma and charm. No one has said that he is lacking in reasoning. It appears that he is taking steps towards emulating Mondale’s courage and honesty. He will undoubtedly face a Republican opponent in 2012 who is less skilled and less polished than he. Unfortunately, all too often, the American people prefer the ‘C’ student with no vision to the ‘A’ student who combines intelligence with empathy [e.g. the elections of 2000 and 2004].

Let’s hope that President Obama soaks in the positive response to his April 13 speech. Many of us have simply been asking for clarity with compassion. He hit that note on the 13th. Mr. President, please keep it up, and in the process, you may school the American people a little more in recognizing and accepting honesty.