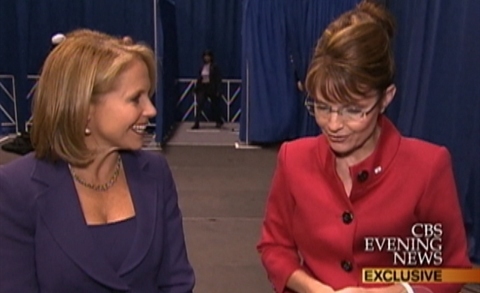 People who have  difficulty gathering and processing information have plenty of company. We all have moments that humble us. Fortunately, there is still considerable forgiveness in our society, so most times we can mess something up and rebound and get back on track.

Harboring a grudge against a neutral observer is an odd sort of behavior. But such is the attitude that Sarah Palin takes towards Katie Couric. I don’t know enough Palin supporters to determine if they think that her continued bitterness towards Katie Couric is an acceptable form of behavior. Fortunately most people have the ability to eat humble pie and acknowledge when they had a bad moment. A good example would be Claire McCaskill in “plane-gate” when she apologized for unwise decisions and took the necessary steps to remedy them. David Letterman acted similarly when he was unfaithful to his wife.

Katie Couric is not exactly a “gotcha journalist.” If anything she has been criticized for asking softball questions and paying more attention to the frivolous than the serious. Actually, it’s that reputation which may have landed her the interview with Sarah Palin that virtually every other reporter wanted after John McCain snatched the Alaska governor out of obscurity and made her his choice to be the Republican Vice-Presidential nominee in 2008.

Since Governor Palin seemed to be somewhat ill-informed about this issues that would face a president or vice-president, Katie Couric wanted to know where the Alaska governor is getting her information. What newspapers and magazines did she regularly read? This is not the early days of pioneering in Alaska when a New York Times might arrive two or three times a year by dogsled. This is the era of the internet where anyone can read virtually any publication on-line. Couric’s question was eminently fair.

Governor Palin said that she read “all of them, any of them that have been in front of me over all these years.” If someone can’t name any of them, isn’t it plausible to conclude that she really means none of them.

It’s very likely that Sarah Palin has indeed read from the mainstream media, what her friend Rush Limbaugh calls the drive-by media. The question from Katie Couric may have just caught her off guard. We all have “senior moments” well before we even approach senior citizenship. Once it happened, Sarah Palin had options. Additionally, she had the opportunity to think about how she would explain her non-answer rather than being caught off guard as she apparently was in the interview.

Instead, Governor Palin called it an unfair question; one designed to “get her.” What Katie Couric was doing throughout the interview was to provide both herself and the viewing public with some information that could assure the viewing public that Sarah Palin was indeed informed and intelligent about major issues facing the nation and the world. If the governor could not answer a question such as what she reads, then the American people would have good cause to question her qualifications to serve on a national level.

Actually in the rest of the interview Governor Palin acquitted herself reasonably well, except when she tried to defend her previous statement that living across the Bering Strait from Russia gave her solid foreign policy credentials.

Here we are over two years later. Sarah Palin has had some time on her hands, especially since she resigned her governorship for semi-inexplicable reasons well before her term was over. For many, time is an opportunity to reflect and even acknowledge past mistakes.

When it comes to the 2008 Katie Couric interview, Sarah Palin has expressed no regret or even explanation as to why she couldn’t answer the “what does she read” question. Rather, when Katie Couric announced that she would be resigning as anchor of the CBS Evening News, Palin could not resist the opportunity to mock Couric. Keep in mind that Couric had never mocked anything that Palin had said, she only reported them.

As reported by CNN,

Appearing on Fox News Tuesday (May 3), Palin mocked the CBS newswoman who told People Magazine she is looking forward to a new position that will facilitate “multi-dimensional storytelling.”

Katie Couric has excelled in quite a few interviews and occasional in-depth stories. Before she became a co-host of NBC’s Today Show, she was a Pentagon correspondent who applied many of the reporting skills she learned at the University of Virginia. She clearly has the credentials to say multi-dimensional story telling. Almost by definition, such reporting stands in contrast to the news reading which is the primary function of a news anchor.

Sarah Palin has still not said whether or not she plans on running for president in 2012. I’d like to believe that she’s been spending some of her hiatus reading thoughtful and informative articles in newspapers and magazines. Even if she has, whatever credentials she might have to be chief executive will be tarnished by her inability to drop a grudge, one that emanates from an incident in which there is no one to blame but herself. Such an attitude may be acceptable to her natural right-wing base, but it probably doesn’t serve her well with the broader public, whose support she will need if she wants to be president. She might want to go back to the western coast of Alaska, look out on the Bering Strait, and do some reflecting.