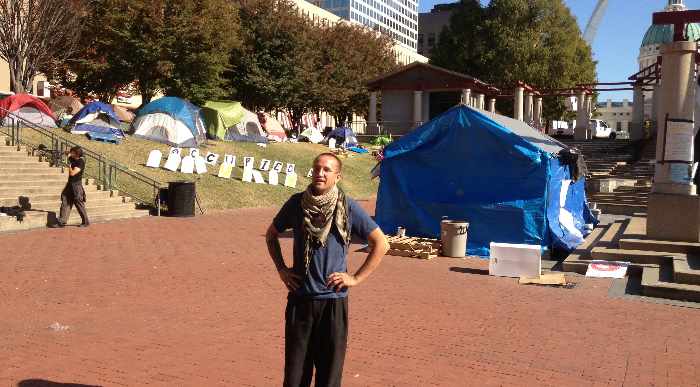 It’s possible that the biggest obstacle to justice is the kindness and generosity of charity. No example can better illustrate this than St. Louis Mayor Francis Slay’s stance that Occupy STL will have to leave its “home” in Kiener Plaza because the Salvation Army’s Tree of Lights will be moving in.

The Tree of Lights, in fact the Salvation Army itself, represents the failure of our society to put in place a strong enough government safety net to protect individuals from the abuses of runaway capitalism or just plain misfortune.

The Occupiers are reminding us that the balance between the benefits of capitalism (honoring creativity, autonomy, strategic thinking, and optimal use of resources) and the regulations that are necessary to keep it in check has tilted too far in the direction of runaway capitalism. As is evident now, we have an economic system that in many ways is more like a slot machine in Vegas, which produces nothing but rearranges wealth in a way in which “the house” makes a profit on all transactions. Conservatives mistakenly think that “the house” is the government, but if that was so why would the government be in such debt while many large corporations on sitting on mountains of cash.

Does Mayor Slay really believe that there is no other location in a metropolitan area as large as St. Louis where a signature Christmas tree could be placed? There are dozens in and around the modest downtown St. Louis area.

What could represent that dominant culture in America more than all the pomp and circumstance that goes with a public Christmas tree lighting? The dominant culture will always survive; it’s too big to fail. The needs of the disenfranchised, i.e. those represented by the “Occupiers,” cannot be met without strong societal support. That help can come in small ways such as moving a Christmas tree rather than protestors making a point, or in large ways such as curbing the power of financial institutions, embracing a full-employment economy, and protecting consumer interests.

The Salvation Army and its Christmas tree is a minimal “feel good” for the recipients of the charity. It is a major “feel good” for the donors who can pat themselves on the back. Each community can brag about how generous it is while poverty remains unabated.

The Occupy movement is a healthy step in the evolution of the American economy from business-centric to being responsive to labor and consumers. To place petty and symbolic obstacles in its way shows a crass insensitivity to the actual quality of life for people in pain. The dominant society will remain. The trick is to make it do so while being inclusive.

Mayor Slay, gather your brain trust and figure out another place to put the Christmas tree. Then, when you have some free time, put your main focus on the issues of importance to the Occupiers.