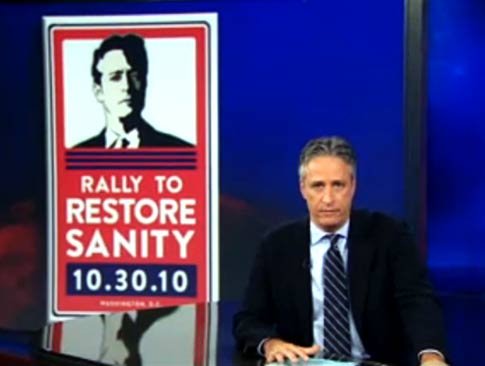 The October 30 Rally for Sanity was organized by comedians Jon Stewart and Stephen Colbert.  Part of the nature of comedy is nuance, at least comedy intended for sophisticated audiences.  By its very nature, nuance means a lack of clarity, and regrettably that seems to describe the Rally.

The obfuscation of the Rally was compounded by President Barack Obama’s appearance on The Daily show three days before.  The president has a plethora of admirable qualities (perhaps this is why many conservatives are so intense in their dislike of him).  However, by his own admission he has difficulty with brevity and at times that translates into confusion.

The lack of clarity about the Rally seems to have paralleled the occasional murkiness of what President Obama is saying.  In the president’s case, he seems to feel that he needs to be cautious so as to not alienate supporters or potential supporters.  This is in contrast to Jon Stewart’s satirical humor which spares no prisoners.

Sanity is a difficult word with which to work because it comes in many shapes and forms.  To call someone “insane” is wading into difficult waters and it is a label that can have a stinging impact when just slightly misused.

But perhaps Stewart et al might have made eight points in advance of the rally to describe the challenges we face today.  These are points that have repeatedly been made through comedy, but need an additional form of communication, gravitas.

1.      We need to be both cautious and alert because the worlds of comedy and news have become so morphed that it is difficult to tell which is which.

2.      Satirists on the left tend to use comedy as a means of conveying news.

3.      Pundits on the right tend to use “news” as a means of conveying infotainment.

4.      Many people cannot tell the difference between news and infotainment.

5.      Comedians on the left base their humor on their audiences knowledge of the news.

6.      Opinion shapers on the right base are best at pontificating their views to those who are least informed.  Many in their audiences not only lack factual information but also the ability to know when they are being manipulated.

7.      When people are disempowered as so many currently are in America, they are susceptible to irrational arguments made by others who want to capitalize on their misery, ergo many in the Tea Party.

8.      When the “haves” in a society manipulate the system to achieve and maintain their largesse, the concerns of those less fortunate become just an afterthought to the concept of the wealthy accumulating more wealth.

Presenters at the rally might have been asked to convey points such as:

1.      Most Americans are uncomfortable with the agenda from the right.  They may not know why, but they sense that either they or others are being used for the advantage of others.

2.      While the left is far from perfect, it generally tries to use reason as a means of addressing issues.   Even if most Americans are apolitical, they will use reason as a way of dealing with a host of issues ranging from managing their household budgets to what restrictions should be placed on gun ownership.

3.      Most Americans would prefer that their leaders respect the value of knowledge rather than glorify the simplicity of simple answers to complex issues.

4.      Most Americans would prefer leaders who ask us to sacrifice when necessary.

5.      Most Americans “want their country back,” but not with a sense of acrimony towards others who are not like them.

6.      Most Americans value science and don’t think that it should be disregarded for political or religious reasons.

7.      Most Americans go through their days without seeing social interaction as “us” versus “them.”

8.      Most Americans do not see generosity towards the poor as “socialism” or any other political philosophy; rather they see it is plain decency.

9.      Most Americans are willing to take steps to benefit planet Earth.

10.  Most Americans would like to see the Civil War as over with those favoring unity and opposing degradation of others as the winners of the war.

Clarity should not be seen as divisive when it includes preferences.  Suppose that Jon Stewart had articulated points such as those listed above as a way restore sanity or at least civil discourse to our society.  Had he done so it would have been a rally which was not a carnival; rather it would have been a statement that our country needs restoration in many ways and it requires more than the divisive answers of the right.

Finally, suppose that when President Obama came on The Daily Show, Mr. Stewart had gone through the points he wanted to accomplish in the rally and asked the president to respond briefly and clearly to them, point by point.  It might have given the rally more meaning, and perhaps more significantly, have given President Obama an opportunity to clearly articulate points on which Democrats could have run the following Tuesday.

The Rally for Sanity was a brilliant idea.  The only thing worse than not having it would have been to excite people by its prospects and then make light of its significance.  Each of us might reflect on whether it was a success or a blown opportunity.  Even if it was too frivolous to have a clear meaning, it still provided us with an experience from which we can build a base for another opportunity.  We need it.