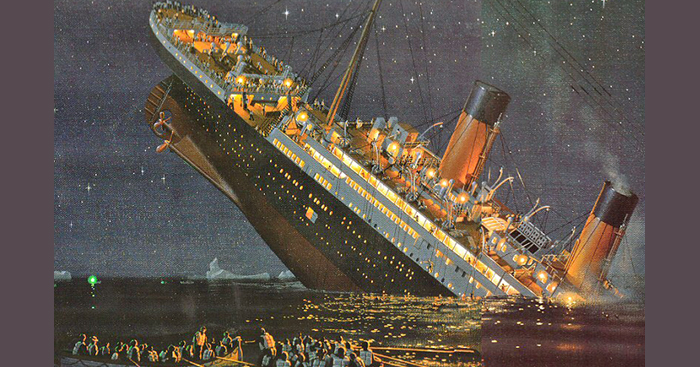 Ignoring warnings of danger ahead. Steaming at full speed toward disaster. That was the tragedy of the Titanic and its rendezvous with a mass of solid ice on the night of April 14, 1912.  With only about two weeks until the August 2nd deadline for raising the debt ceiling, the fate of our ship of state has much in common with that ill-fated ship.

After all, the Titanic was considered state-of-the-art for its time—too big to fail. And because of that belief, there were only twenty lifeboats onboard, only enough for about fifty percent of the more than two thousand passengers.  Earlier on that infamous evening, other ships had reported icebergs in the area and recommended proceeding with caution.  But belief in the ship’s unsinkability gave the captain the confidence to order the ship to plow full-speed ahead.

Like the captain of the Titanic, Republicans are ignoring advice to proceed with caution. Just take a hard look at their irresponsible, risky, and irrational approach to the debt-ceiling negotiations. We’ll never know if these stalwart guardians of all things advantageous for the economy’s highest earners believe their own fantasy rhetoric about the economy’s ability to weather a default. But surely since last May, when debt-ceiling discussions began in earnest, the Republicans have been blithely ignoring the danger signs out there in the chilly waters that are the fragile American economic recovery.

As economist Robert Kuttner, founder and editor of The American Prospect, explains: “It is one thing for right-wing Republicans to deny Darwin, or sexual orientation, or even climate change, where the consequences can be fuzzed up via junk science and the impact of science-denial is diffused or delayed. It is quite another to deny the reality of an event scheduled to happen in a couple of weeks.”

Dismissing calls from a slew of what Republicans might call “financial know-nothings,” such as Secretary of the Treasury; head of the Federal Reserve; 450 business leaders, the conservative U.S. Chamber of Commerce, and the Business Roundtable who sent a letter urging that “it is critical that the U.S. government not default in any way on its fiscal responsibilities,” Republicans appear not to care who drowns in the economic maelstrom that clearer heads and steadier hands have been predicting if the U.S. defaults on its obligations.

And make no mistake about it. Failing to raise the debt ceiling will not just affect the bottom line for the fat cats of Wall Street.  According to a majority of mainstream economists, a Republican-induced default could unleash a torrent of dire economic blowback for the highest to the lowest earners.

And what would the federal government and the economy look like after the first default in this country’s history?  According to the nonpartisan National Journal:

No matter how many calls by economists, responsible politicians, and business moguls for sanity on the debt-ceiling issue, the negotiations-that-shouldn’t-be-negotiations seem each day to be going nowhere. As the August 2nd deadline approaches, the hope is that rational and responsible players in Congress and the White House will prevail and steer the ship  onto a safer course.  If not, get ready.  It might be time to haul out the lifejackets.