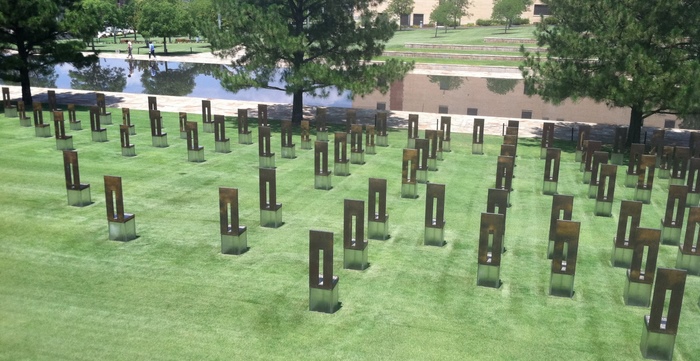 Oklahoma City, July 19, 2011: As I stopped for gas between Tulsa and Oklahoma City, on the counter of the convenience store was a copy of the Oklahoman newspaper. Other newspapers reported that the U.S. was in the midst of a budget battle with budget plans ranging from a stop-gap measure to reduce the debt by $1.5 trillion in ten years to “the fully Monty” — a $4 trillion reduction.

The headline said that Oklahoma’s Republican Senator Tom Coburn had just announced a plan to reduce the debt by $9 trillion over the next ten years. This was more than a 100% increase over anything else proposed, even by Wisconsin Congressman Paul Ryan, a leader of the far right movement in the House of Representatives. In defense of Coburn, he seemed to have some good ideas that even progressives could support. He suggested raising the retirement age for Social Security to 69 by 2080, an idea that seems to make actuarial and economic sense. Most importantly, it makes common sense.

However, we all know that cut-throat measures by Republicans designed to make those who can least afford to pay the burden is nothing short of mean-spirited. It’s also bad economics, because as workers lose jobs or retirees benefits, there is less money in circulation to keep the consumer economy going.

Several hours later, I reached Oklahoma City. As soon I we arrived, I walked over to the Oklahoma City National Memorial & Museum. This is the memorial at the site of the former Alfred Murrah Federal Building which had been destroyed by Timothy McVeigh’s act of domestic terrorism on April 19, 1995.

In many ways, the museum is dedicated to healing, but I couldn’t help but think about how McVeigh could have had such hatred for the federal government that he was willing take 168 lives including 19 children under the age of 6.

Much has been written about how McVeigh’s life seemed to be characterized by a slow burn directed against any form of authority. When the U.S. Army decided that he was not fit to join the Special Forces, he became more bitter and simultaneously more enamored with violence The siege on the Branch Dividians in Waco, Texas in 1993 further infuriated him.

Over the course of time, his vague disdain for the federal government became a plot directed at federal workers inside the Murrah Building in Oklahoma City. Almost single-handedly, he carried out a vicious plot in which innocent civilians became the victims of his rage.

Regrettably, hate is a basic human emotion. There have been Timothy McVeighs since the beginning of humankind, but few had access to the weapons of mass destruction that he had.

Visiting the site where McVeigh caused such carnage only reinforced how deeply violence is embedded in our society. It’s not the Senator Coburn advocates violence. However, in some ways his budget plan reflects a disdain for the federal government and the people that it serves with almost the same intensity as McVeigh. Using very different strategies, they both show very little empathy for those among us who are most in need.

Every person I’ve met in Oklahoma has been kind, generous, and courteous. I doubt that any of them have anything but disdain for McVeigh. However, the law of averages would say that some of them have voted for Tom Coburn. Coburn may not blow up a building and kill 168 people, but the machete that he wants to take to the federal budget to eliminate $9 trillion will inevitably result in the untimely deaths of far more than 168 people. The impact of McVeigh’s act was very visible. The proposals of others who seem to dislike the federal government as much as he did possibly causes more harm while being less visible. “The price of liberty is vigilance,” said abolitionist Wendell Phillips more than 150 years ago. It’s incumbent on all of us to see through the smoke screen at what damage will be done to innocent people in the name of balancing the budget.