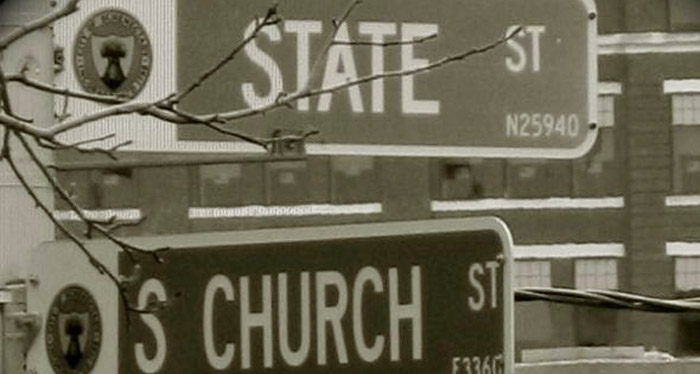 A U.S. Court of Appeals has ruled that the board of commissioners in Forsyth County, North Carolina, can no longer begin its meetings with highly sectarian prayers. As reported in the New York Times, one of the prayers cited in the case goes like this:

“Heavenly Father, tonight we are so grateful for the privilege to pray that is made possible by Your Son and His intercessory work on the Cross of Calvary…And we’re so grateful tonight that we can look in the Bible and see how You instituted government.

Need I point out all that’s offensive and exclusionary about that invocation? And that’s only one prayer of many. Someone did a statistical analysis of similar opening prayers offered at the county’s board of commissioners meetings and found that, “almost four-fifths of the time, [they] made sectarian references to tenets of Christianity.”

The Fourth Circuit Court of Appeals, in a 2-to-1 vote, said that those prayers violated the establishment clause of the Constitution, by “endorsing Christianity to the exclusion of other faiths.” The court went on to say that the county was, essential endorsing “the majoritarian faith in the community at the expense of religious minorities.”

A lot of people aren’t going to like this decision. I witnessed a lower-level, but similar event in the 1980s. The newly elected mayor of my suburban community announced, at the first city council meeting over which she presided, that meetings would no longer begin with a prayer. It was a courageous move that met with indignation and scorn, and it permanently poisoned her relationship with the City Council. She never recovered and was trounced in the next election.  But, personally, this non-Christian, non-believer—always uncomfortable with those religion-endorsing opening prayers, both locally and in Congress—still thinks that the mayor did the right thing. I applaud her and the Fourth District Court. [Amen.]