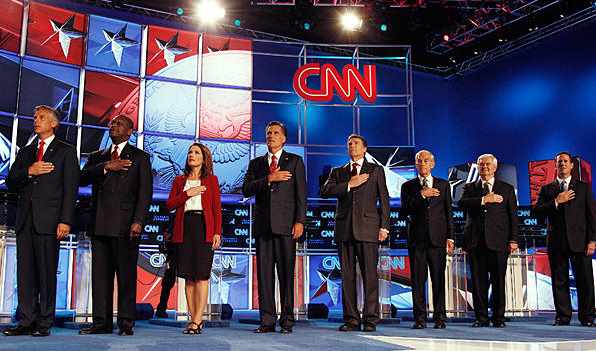 They all feel that the key to economic growth is reducing taxes and eliminating regulations. They all trust the private sector to manage health care.

Differences of opinions among the Republicans are minimal. However, there can be moments of interest. Michele Bachman and Rick Perry battle one another for to see who makes the most faux pas. Herman Cain is truly a character – so much so that he says what he would bring to the White House would be humor. He might be right about that. Ron Paul is appalling. Without emotion he expresses a preference to maintain the free enterprise system at the expense of providing health care for a young man or woman in a coma.

What the Republicans don’t provide is either thoughtful dialogue or solutions to our problems. There is no incentive to do so. Their debates might be characterized as “pandermonium” as they try to outdo one another in pandering to the Tea Party, their so-called base. The televised debates should not be called broadcasts. They are actually narrowcasts in which each candidate tries to slice and dice his or her comments to satisfy the small percentage of voters who only drink tea.

But the Republicans are the only party in town for now, and probably until after both party conventions are concluded next summer. President Barack Obama is unopposed in the Democratic Party and thus there are no debates with Democrats until after Labor Day. For anyone interested in promulgating the Democratic agenda (assuming that there is a clear one), it may be a year before it goes face to face against the Republicans.

So here’s a thought to remedy the problem. Suppose we established a “sweet sixteen tournament” between Democrats and Republicans and start it now. Republicans would not have the luxury of parroting one another and assuming that no one likes Social Security in its present form. Each Republican would have to face off against another Democrat. You might have two consecutive nights, each with four half-hour debates. President Obama would be exempt from the competition since his chance will come later and he has a tougher day job than any of the other participants.

The system could be structured so that the opponents for each Democrat or Republican would be different in each debate. Here’s a graphic representation of what it could be:

The next week the deck could be shuffled so that no candidate faced one who he or she previously debated. The issues may be similar to those from the first week or they might be different. Frivolous (Coke or Pepsi) questions would not be allowed. The moderators would be creditable journalists such as Jim Lehrer, Gwen Ifill, or Judy Woodruff. There would be no silly YouTube or Twitter questions.

This has the potential to be beneficial for both Democrats and Republicans. Democrats would get a message (or more likely a combination of messages) out at a time when they are not being heard with the exception of the president. Republicans would have to stand up against the type of opposition they will face in Fall, 2012. Their supporters will see which ones can successfully parry arguments from Democrats.

How could it be worse that Republicans trying to distinguish themselves from one another when they essentially agree on everything. It’s worth a try and certainly would come closer to “must see TV” than what we have now.