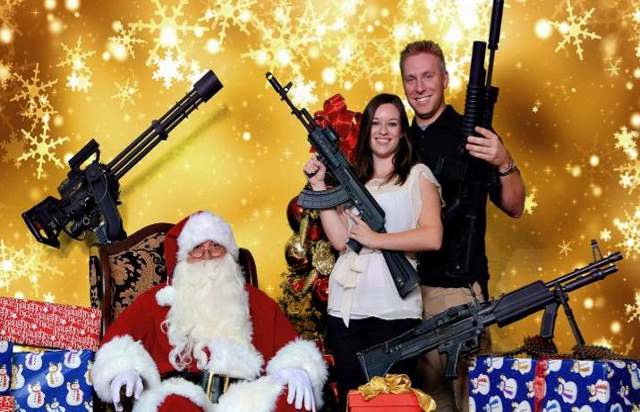 The word that comes to mind when seeing the photo above is shame. The photo comes from Arizona, where Congresswoman Gabrielle Giffords was gunned down on January 8, 2011. She was reaching out to meet with constituents when a troubled man approached her and those around her and just started firing. Six individuals were killed, and twelve others besides Rep. Giffords were injured.

But who is ashamed and who is to be shamed? As an American, I am ashamed to have this image, one that undoubtedly has been circulated around the world, represent a “legitimate” way of celebrating Christmas. I thought Santa was a peaceful, kind old gentleman who limited his acts of nastiness to placing a few pieces of coal in the stocking of a young child who, in the eyes of his or her parents, had acted poorly over the past year. I thought that if there were guns near the Christmas tree, they were made of plastic and could shoot nothing more harmful that a light stream of water.

Even though I am not a religious person, I think that there is such a thing as the Christmas spirit, and it involves, love, caring, and sharing. I’m even willing to accept that it includes an excessive amount of commercialism. What it does not include is violence or threats of violence.

But my shame at the sight of the photo and everything that it represents is relevant only to the extent that I share my thoughts and some people listen. I’m somewhat preaching to the choir; those reading this post are probably of a similar frame of mind to me.

The question is, “Is there any shame among the people in the photo, the person or persons whose idea it was to orchestrate such a photo, the person who “shot” the photo, and the persons who proudly distributed it to the public? Are they at all embarrassed by violence in the United States? Are they embarrassed by not only our lack of gun laws, but the intensity with which our leaders and followers refuse to discuss the issue? Are they concerned that Mark Kelly, Gabrielle Gifford’s husband, might see the photo and once again wonder in what kind of society does he live where guns can be viewed so cavalierly and seen as objects of humor?

No doubt those responsible for the photo and the “guns with Santa” event would say that they are simply exercising their freedom of speech under the First Amendment. They might also say that in their opinions, the second amendment guarantees them the right to possess guns.

The question is, would those involved be influenced if there was massive outrage across the state of Arizona and throughout the United States? Suppose that President Barack Obama said that he was embarrassed by the flaunting of guns at Christmas time? I know, he wouldn’t shame the people responsible for it and instead he’d receive blowback as someone who is “soft on guns.” So the President would have too much to lose by taking on this issue. But suppose that children, parents, teachers, child welfare advocates, health care workers – just about everyone who in one way or another is impacted by the reckless use of guns spread the word that this photo does not represent the American in which they want to live. Suppose that we had a conversation about how guns can be part of our society, part of our culture, but they should be presented and utilized in a way that minimizes their offensiveness to others?

We can try. Jon Stewart made the guns with Santa his “Moment of Zen” on Tuesday, December 6. You might want to take a look below (about 10 seconds), see how you feel about it, and perhaps ask a few friends their thoughts about glorify and trivializing guns at the same time. We can do better.