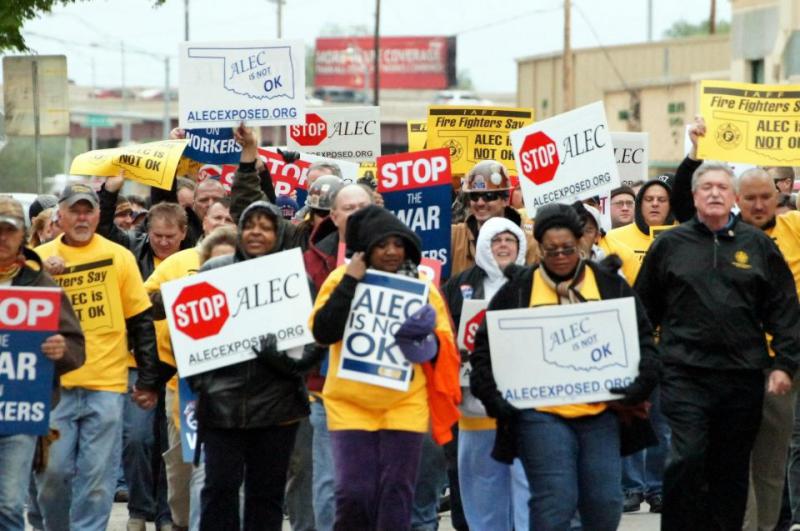 You can try to argue that ALEC [the American Legislative Exchange Council] is a private group and can do whatever it wants in the privacy of its own annual convention. You can try to convince me that the “freedom” ALEC is constantly talking about defending also means freedom from listening to people who don’t agree with you.  But you won’t succeed in convincing me, because ALEC—while technically a private lobbying group—exerts tremendous influence over the public laws that are passed by our state legislatures.  ALEC pursues a radically pro-corporate, anti-union, anti-worker, anti-employee, anti-middle class, pro-business agenda state legislatures. Its membership roster includes legislators from every state, who, by attending meetings like the one in Oklahoma City [May 2013], are double dealing the voters who elected them by representing the corporate interests of ALEC. Their allegiance to the private interests of ALEC undermines their roles as public servants. In my view—and I’m far from alone in this—that gives the rest of us the right to pierce ALEC’s jealously guarded secrecy and to know what their minions in our state legislatures are up to.

So, it’s not okay that, when citizens and legitimate reporters tried to observe and [gasp!] report on the goings-on at ALEC’s 2013 annual meeting in Oklahoma City, ALEC circled the wagons, slammed the doors, and treated visitors as criminals.

… assembled a dossier of disfavored reporters and activists, kicked reporters out of its conference who might write unfavorable stories, and managed to boot a community forum critical of ALEC from its reserved room.

… Oklahoma City Police Officers in full uniform — but reportedly off-duty and paid by ALEC — stopped anyone not wearing a name badge from entering ALEC’s sections of the convention center.

Most egregiously, ALEC put together a “Most Wanted List,” described by Truthout this way:

The Center for Media in Democracy [CMD] obtained a document titled “OKC anti-ALEC photos” at the ALEC conference. [Click on the link to see the most-wanted photo array.]

The page featured the pictures and names of eight people, four of whom work with CMD…It is not known whether the photo array of people who have reported on or criticized ALEC was distributed to ALEC members or shared with Oklahoma City law enforcement.

Other targets on the document included The Nation’s Lee Fang, who has written articles critical of ALEC, and Sabrina Stevens, an education activist who spoke out in an ALEC task force meeting last November. Also featured were Calvin Sloan of People for the American Way and Gabe Elsner of Checks and Balances Project, both of whom are ALEC detractors.

The name of ALEC Events Director Sarah McManamon was in the top corner, indicating the document was printed from her Google account.

It’s bad enough that, judging from their past actions in state legislatures, ALEC’s so-called public-sector legislators are clearly more beholden to their private-sector donors/allies than to the general public. It’s even more deplorable that ALEC’s bought-and-paid-for elected officials continually try to keep the public from knowing what they’re doing on behalf of groups other than the public. But creating a “Most-Wanted” list that portrays law-abiding citizens as though they are criminals? That’s a new low.