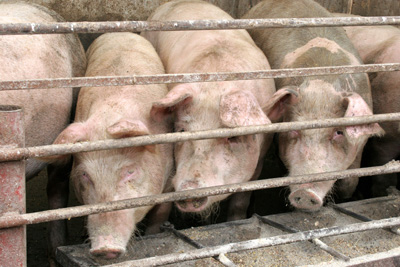 Over the past 20 years, the pork industry in the United States has increased productivity and cut costs through industrialization.  The process of pork production, once dominated by over hundreds of thousands small independent hog farmers, has become more concentrated in order to take advantage of economies of size. The reduction in the number of smaller, distributed farms results in a more efficient industry that is dominated by a few large and intensive operations.

However, this change has had complex environmental, economic, and political ramifications.  In general, the livestock sector affects many natural resources and the increased intensity of hog farming in specific geographic regions amplifies these effects.  The increasingly concentrated levels of hog waste pollute surrounding regions and emit dangerous greenhouse gasses, such as methane, that contribute to ozone depletion. Further, many of the industry leaders in large-scale concentrated animal feeding operations (CAFOs) have significant financial clout and political connections. This power, coupled with particular financial interest in a loosely regulated pork industry, makes impartial public policy improbable, as industry interests directly compete with those of small, low-income communities and comparatively weak environmental advocacy groups.

Although hog farming has always had a presence in North Carolina, the industry experienced exponential growth in the 1990s. The hog population increased from 2.6 million to 8 million from 1988 to 1998 and North Carolina’s pork production rapidly surpassed the Corn Belt’s, as it became the nation’s second-largest hog farming state after Iowa. Following the nation-wide pattern of increased concentration of large operations, from 1983 to 1997, the number of hog farms in North Carolina decreased by 78 percent, despite a five-fold increase in hog population. Nearly all of the state’s pork industry’s growth was from industrial-scale enterprise, and resulted in a critical reduction of the number of independent farmers.

However, the explosion of the North Carolina pork industry also brought a welcome economic stimulus and remains a crucial part of the state’s economy, as the industry employs many farmers who lost their livelihood in the struggling tobacco industry. And despite the reduction of independent farmers, total employment in the state’s hog farming industry increased by 16% from 2001 to 2006. The industry provides a windfall of approximately $1 billion annually for North Carolina in the form of tax revenue.

When the community of Tillery in Halifax County, N.C. was told that they should expect to see 410 new hog farms in NC by the end of 1997, they decided to act. Citizens mobilized a grass-roots movement called HELP [Halifax Environmental Loss Prevention], and began their fight for environmental justice.

Tillery is a poor, black, and rural area and is a “prime target for hog expansion.  Traditionally, poor marginalized citizens are less prone to voting, and corporations that open in those areas are less likely to suffer political consequences from constituent backlash. Nonetheless, the movement gained momentum and attracted the support of environmental advocacy groups to make their voices heard in legislation.

Even with the support of local organizations, citizens were still weak compared to powerful pork producers. The NC Pork Producers political action committee, the Pork PAC, spent significant amounts of money to fight industry regulation. In 1994, 92 out of 170 state representatives received campaign contributions from the committee. Wendell Murphy, owner of Murphy Farms, contributed $150,000 to candidates. The revolving door between North Carolina legislators and pork executives is substantial; many legislators are or were hog producers.  Wendell Murphy was a state representative for five years and a senator for three. Former Senator Lauch Faircloth, who served on the congressional Environment and Public Works Committee from 1993 to 1996, was once also a wealthy hog farmer.

However, citizens had their own way of giving legislators an incentive to favor environmental protection.  Organizations such as HELP, environmental advocacy groups, and the media informed constituents of the industry’s detrimental effects. Thanks to the democratic process, large campaign contributions are not what ultimately keep legislators employed, and eventually enough angry constituents reached state congressmen.

Significant numbers of letters to representatives prompted legislators to pass stricter regulation and to budget $1.5 million to fight hog pollution. The citizens also successfully convinced commissioners to establish a committee to analyze the health consequences in the region. Soon thereafter, the committee passed a livestock ordinance that stopped three out of the seven hog farms who previously had plans to open in Halifax County. HELP continues to inform other communities of the environmental injustice practiced by hog farms and has done so through town meetings and  “hog roundtables.”

Halifax County was the first local government to increase hog farm regulation. By the late 1990s 14 North Carolina counties followed suit.  In 1997, a state statute was modified by North Carolina House Bill 515 to give counties the power to pass zoning amendments to control hog farm location, giving counties the ability to create large buffer zones between farms and communities to protect citizens from local water and air pollution.

Ultimately, HELP won the hog farm fight in Eastern North Carolina.  HELP’s efforts remain a best practice for instilling a citizenry lobby that is powerful enough to fight big-business interests. Their success cannot be understated, as a successful citizenry lobby may be the only force strong enough to give environmental interests a fighting chance.