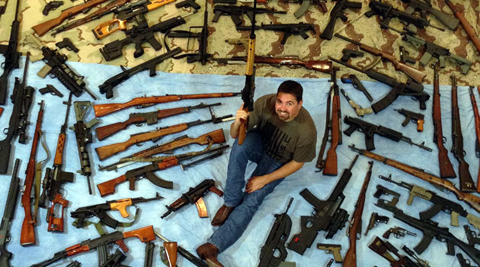 There are two ways to solve the gun crisis in America that have yet to be discussed. First, there is one group above all others that is the source of most of gun violence in this country. According to the US National Library of Medicine/National Institute of Health one group of Americans caused 85.3% of all deaths by firearms in this country between 1976 and 1987. That is a pretty overwhelming statistic. Obviously, if we can get the guns away from this group then we can drastically reduce the amount of gun violence in this country.

The deadly group? Men. All we have to do is make sure men are never allowed to own, touch, or have any access to guns. Women can continue to have all the 2nd Amendment freedoms that they enjoy today. Men, not so much. With over 85% of all gun violence fueled by testosterone, I have no idea why this hasn’t been tried already (other than the fact that men make the laws, control almost everything, and would cry as though their favorite team just lost the Super Bowl were anything even close to this tried).

Imagine a world where buying a phallic stand-in would have to involve something that was not directly about snuffing the life out of another living being. I hear fast cars are a pretty good substitute for inadequate man pipes. Perhaps men could take up archery. Granted, getting a concealed carry permit for a long bow and a quiver doesn’t have the same thrill of stealth, but it’s a great way to play out your Green Arrow fantasies. Perhaps a Paleolithic spear thrower is more your style. Going old school.

It all sounds quite silly, but gun violence is never very funny. Having one group perpetuating so much more violence than another does point out that the testosterone-possessors among us need to be severely regulated. As the familiar phrase goes, “Everyone is a responsible gun owner until they aren’t.” So what can be done?

Enter the second way to regulate guns! We need to look at an approach taken by the very people who scream the loudest if gun ownership is threatened. After all, they’re masters at knowing how to take away a protected right.

Imagine that there’s only one store in your state that sells guns and it’s nowhere near you. Now imagine that there is no one in your state willing to sell guns, so a guy flies in once a week, on Friday, to open the shop. Now imagine that your state legislature passes a law that makes it mandatory to talk to the gun guy 3 days before you’re allowed to buy a gun from him. Oops, since he’s only there once a week, that means you’ll not only have to pay to fly to that one location where there’s a shop, but you’ll also have to get a hotel for a week. Don’t despair!

Those same lawmakers have also mandated that you not only get lectured by the gun guy against owning a gun, including made-up stuff about guns exploding in people’s hands all the time, or spontaneously burning down houses, but you also have to go for a long lecture from a bunch of people who don’t know anything at all about guns except that they hate them. These people will get to talk for several hours about the evils of guns and no one will check to see what they say is true. After you get this mind-numbing, one-sided, mandated lecture, you’re free to talk to the gun guy one more time, when he flies to the state. If you still want the gun, you get to wait until the gun guy returns (which includes getting to pay all those hotel fees, round trip airfares, or whatever). Yay! He’s back. One final lecture and you’re the proud owner of a small handgun (there are size limits)!

You may think this is ridiculous because, after all, the right to bear arms is the law. You should be protected. Roe vs. Wade made abortion legal. And yet the above is basically the reproductive law in several states. Just substitute doctor for “gun guy” and “legal medical procedure” for “gun”. Cheer up, though, because I could be discussing “admitting privileges” for gun shop owners and so sorry, you’ll have to go to Mexico and risk dying from defective arms.

So what’s the big difference? Guns are used to kill, so it can’t be about “saving lives.”Both are legal. You tell me. Why is one law backed up by billions of dollars, countless lobbyists, an enormous and powerful organization and the worshipping voices of millions of fans of things that blast holes into animals and people, and the other consists of women (because there isn’t a single law on the books restricting the rights of the father of those precious cells). It’s time to go all “pro-life” on the NRA.