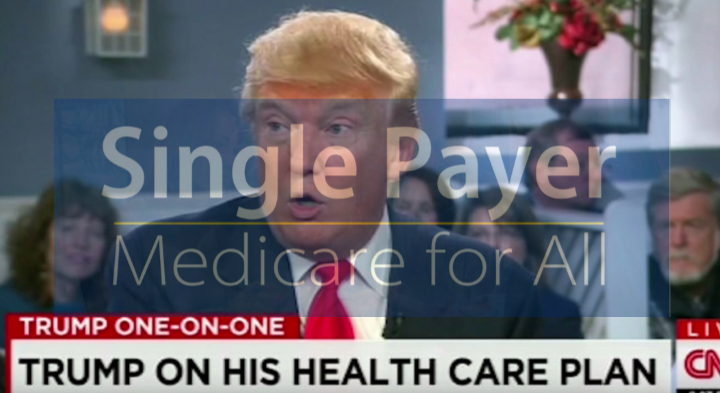 A common practice in politics is to define your opponents before they define themselves. Usually this results in gross misrepresentation of where the opposition stands. But earlier this week, Donald Trump gave Democrats a helpful shove as he described their position on health care reform.

In a meeting with GOP senators at the White House, Trump rambled on about what Republicans should do to “fix” health care. In the process, he characterized what he sees as the Democratic position on health care:

The way I looked at it, we have no democrat help. They are obstructionists and that’s all they’re good at is obstruction. They have no ideas and they’ve gone so far left, they’re looking for single payer, that’s what they want, but single payer will bankrupt our country, because it’s more than we take in for just health care. So single payer’s never going to work, but that’s what they like to do. They have no idea what it will be and you wait in line for weeks before you see a doctor.

The good news is that Trump said about the Democrats what they could not say for themselves – that their position on health care reform is to adopt the single-payer, or more accurately phrased, Medicare-for-All system. Yes, there are the Claire McCaskills and Nancy Pelosis of the world who think that Democrats should continue to be mired in the world of confusing health care policy that is in essence what the Affordable Care Act became when the Public Option was no longer an option. But more and more Democrats are coming to see that Medicare-for-All is the best policy to adopt because (a) it provides the greatest amount of care at the most affordable cost and (b) politically it is viable because it is simple to explain.

Trump, who once said that Medicare-for-All was a good idea, now demonizes it and uses “reasoning” that is as fake and most everything else that he says.

He states that Medicare-for-All will bankrupt the country. Well yes, if the government was paying for all health care coverage without reforming taxes, that would be the case. But what he, and all Republicans and many Democrats fail to point out, is that there is a huge reservoir of untapped revenue for the federal government because the payroll tax (Social Security and Medicare) is capped at $118,500. Most taxpayers have 100% of their earned income subject to the payroll tax because they make less than $118,500. But for someone who make a million dollars a year, they have FICA taxes levied on less than 12% of their income. For someone who earns ten million dollars a year (and certainly is in a position to pay more taxes), FICA withholding applies to only 1.2% of their earnings.

Here a couple of other economic benefits of Medicare-for-All that are rarely mentioned:

Now might be the time for Democrats to thank Donald Trump for clarifying their position on health care reform. Progressives, step ahead of Claire and Nancy and lead.