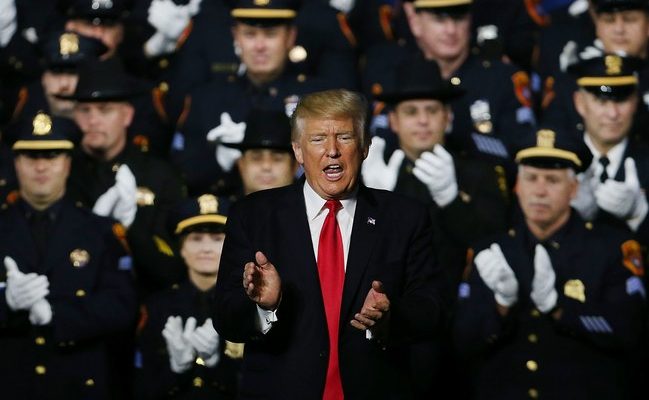 The acting chief of the Drug Enforcement Agency [DEA] is not pleased with Donald Trump’s remarks to law enforcement officers, telling them not to be “too nice” to suspects. He has expressed his displeasure in an email to DEA agents, calling on agents to show “respect and compassion,” and saying that he felt compelled to speak out because “something is wrong.”

Trump made his now-infamous remarks during a speech on Long Island last week. He said:

“Like when you guys put somebody in the car, and you’re protecting their head, you know, the way you put your hand over their head,” he said, putting his hand above his head for emphasis. “I said, ‘You can take the hand away, OK?”

The remark gave the distinct impressions that Trump was encouraging police brutality. But White House press secretary later told reporters that Trump was only joking. [That is one of Trump’s standard dodges when something inappropriate that he says provokes criticism.]

The DEA’s acting director, Chuck Rosenberg, didn’t laugh. One day after the speech, he sent an email to the entire agency, instructing DEA personnel to disregard the suggestion that suspects should be roughed up.

In the email, Rosenberg said:

I write because we have an obligation to speak out when something is wrong….The President, in remarks delivered yesterday in New York, condoned police misconduct regarding the treatment of individuals placed under arrest by law enforcement..

Rosenberg then reminded his agents of their core values, including accountability, diversity and integrity.:

Rosenburg is among a growing cohort of government officials who are beginning to speak out against Trump’s offensive utterances and destructive policies. Leaders of police departments in several parts of the country have said publicly that the president’s words didn’t reflect their views. For example:

The Suffolk County Police Department issued a statement declaring that the President’s recommendations were at odds with the department’s procedures, as did the N.Y.P.D., the L.A.P.D., and the International Association of Police Chief.

Watch this video montage of his remarks regarding how the police should treat suspects. I don’t see joking here. I see a demagogue, a president, who is off the rails, who wants to appear tough, and who doesn’t really care what he says or what the impact of his words are, and who will try to disavow his id-driven remarks by calling them “just joking” when they are poorly received. It’s not funny, and it’s not normal.