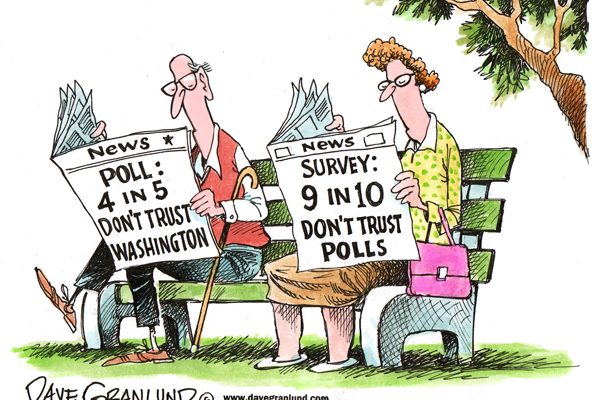 Missouri’s incumbent U.S. Senator Claire McCaskill faces a challenge in November from Republican Josh Hawley, and things are heating up, as I learned today in a phone call from a polling company. A nice young man [clearly needing a megadose of Dayquil], who identified himself as representing a polling outfit known as SSI Research, asked the questions. Curious, as always, I stayed on the phone, even though I had to say “Hello” three times before he picked up [a dead giveaway that it’s a boiler room call]. Still, I persisted. And I’m glad I did, because this “poll” was clearly about message-testing—and the messages they’re contemplating are nasty.

Here’s my walk-through of the survey, as accurately as I can recount it, based on the fast and furious notes I was trying to take. Don’t take the quotes literally, they’re transcribed as best as I could get them in the moment. [I had him repeat several of the questions so I could get them down.] The questions are in bold. My responses are in brackets, in case you care.

It started with the typical, “How likely are you to vote?” [Very likely]

“Which of these individuals are you aware of? And do you view them favorably or unfavorably?”

Claire McCaskill [Very favorably. Well, I’m a bit less enthusiastic than that, but I’m not telling that to a Republican pollster.]

Here’s where it got good. This is obviously the message-testing portion of the program. I’m sending this post to Claire McCaskill’s campaign, so in case they haven’t seen it yet, they can fact check it and be ready to counter the bullshit.

“Now I’m going to read you a list of statements about Claire McCaskill. Please rate them on a 100-point scale, with 100 meaning that this statement makes you very angry, upset or concerned. You can use any number from 0 to 100.”

“Claire McCaskill voted for an energy bill that would kill 76,000 jobs in Missouri.”  [I ranked that 0. Hope I did that right. I’m trying to send the message that I support what Claire does. I would have to give that statement itself a 100, because it makes me angry when polls use push questions, exaggerate, and distort the facts.]

“Claire McCaskill’s husband’s company invested in low-income housing that has received 100 million dollars in government funding. Receiving these taxpayer-funded handouts didn’t prevent the company from displacing thousands of disabled veterans.”  [I ranked that one a 0, too. Again, it’s a 100 for negative messaging. Fact-check, please.]

“Claire McCaskill voted against tax relief for middle-class Missourians, while personally taking advantage of complicated tax schemes to avoid paying her fair share of taxes.”  [0, for the same reasons as above.]

“Claire MCaskill has failed as a champion of veterans. She missed 50 percent of votes in the Senate Armed Services Committee.” [0]

“Claire McCaskill is out of touch with her Missouri constituents. She billed the government for use of private jets, and she said that ‘normal people’ can afford private jets.’ [0.]

Was my rating strategy correct? Was the rating system confusing? Did I overthink it and outgame myself? Maybe someone can help me figure that out. Whatever the case, Claire needs to prepare for some negative messaging—assuming, of course, that this was a Hawley-sponsored poll.

In the final portion of the survey, my sniffly pollster reads me a series of statements, to which I am asked to respond on a scale of 1 to 9, with 9 meaning I completely agree, and 1 meaning I do not at all agree. Here it is:

“We should prevent sanctuary cities from protecting illegal immigrants and defying immigration authorities.”  [1. I actually understand this rating scale.]

“Congress should include funding for more immigration enforcement and building a wall along the Mexico border.”  [1. Nope.]

“The United States should decrease immigration and prevent refugees from entering the country.” [Give me your tired, your poor… 1]

Mr. Sniffles told me that, had I answered that I was probably going to vote for Josh Hawley, I would have gotten a list of statements about him instead. In a way, I wish I had gone for Hawley, just to see what the questions would be. Silly me. I was honest.