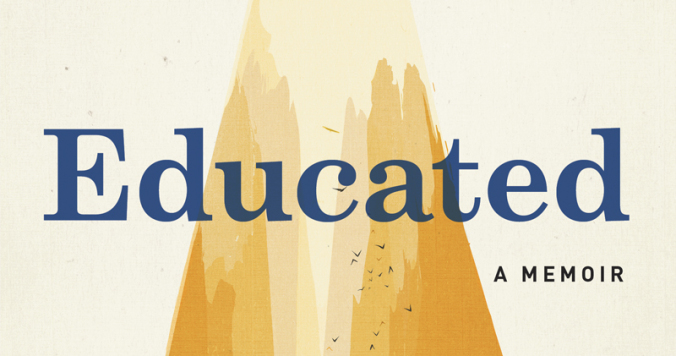 A simple description of Tara Westover’s “Educated” would be that is a memoir of a childhood and young adult years in a fundamentalist Mormon family in rural Idaho. But it is much more than a chronological retelling of childhood memories based on contemporaneous diaries and journals saved through the years. It is a dissertation on family dysfunction, psychological damage, and the struggle for self-actualization in the face of great opposition.

Born in 1986, Tara Westover is one of seven children in a family dominated by a father with religious beliefs and a social philosophy that many would describe as fanatic. Averse to societal norms, he eked out a living salvaging scrap metal from a junkyard that he maintained on his property in the Idaho hills. He refused to send his children to school; they worked for him in the scrapyard instead, doing dangerous jobs that repeatedly resulted in severe injuries [never to be treated by the highly suspect “Medical Establishment.”]  He viewed women as secondary and required them to be subservient. Westover’s mother obeyed. She became an unlicensed, naturalist midwife and an herbal healer. Westover’s father became obsessed with the 1992 Ruby Ridge incident, in which federal agents shot and killed Randy Weave’s family, and he lectured and preached to his family often about what he saw as the coming End of Days.

None of that sounds too bad—just highly unusual—until you factor in the harsh, unrelenting, physical and psychological abuse Tara suffered at the hands of her father, her loving but complicit mother, and especially her older brother, Shawn. Westover’s memoir chronicles all of it, in vivid and uncomfortable detail.

Becoming educated, as the title implies, is Westover’s way out. But that journey is extremely complicated for a young girl raised in a family that rejects public education, preaches the supremacy of scripture and Mormon doctrine over secular learning, and exerts enormous psychological pressure against Tara’s urge to learn beyond the limits imposed by her family. Her mother taught her to read, but that was the extent of her “home-schooling.” At 17, she managed to convince her family to let her enroll in Brigham Young University [a difficult process, because she had no high-school transcript and even lacked a birth certificate.] In her early classes, she discovered how far behind she was: Once, reading a passage aloud in class, she stumbled over the word “Holocaust,” and asked what it was. The professor thought she was joking and chastised her.

Her tenacity is remarkable—bordering on superhuman. Her academic intelligence impresses teachers, professors and peers, and she pursues higher studies, always opposed by her parents. Time and again, as her formal education moves from undergraduate to graduate to doctoral level, her family rejects her efforts and literally demonizes her—calling her possessed and evil. [Her parents, who never otherwise traveled, flew to England while she was studying at Cambridge, and stayed in her dorm room with her for a week, intending to “exorcise” her.]

Even as she begins to gain some geographical and psychological distance, and begins to be able to analyze and understand the dynamics of her family, she is constantly drawn back in, still craving their love, still wanting to belong, still stung by their ultimate rejection. And virtually every year, when she returns to her home in Buck’s Peak, Idaho, for Christmas, something happens that makes her want to flee, while at the same time feeling the need to stay.

“Educated” gave me an inside view of a world I knew little about, except through stereotypes of off-the-grid, fundamentalist Christian families. This memoir is not an indictment of Mormonism, survivalism, or religion in general. This is personal. Westover’s account includes many difficult memories, described in [often literally] painful detail. She is honest about her ambivalence, her academic insecurities, and her unending internal war between self-actualization and family loyalty. By the end of this engrossing memoir, she has educated herself—and more than just academically. She has paid a big price for her urge to learn. And while I sometimes had to force myself to read certain passages, and wanted to scream at her to not go home, to not get in the car with her brother, to tell someone what was happening to her, I couldn’t put it down. I just hope that Tara Westover has been able to use what she has learned to broker a peace with herself. Sharing her experiences with readers is an education itself.