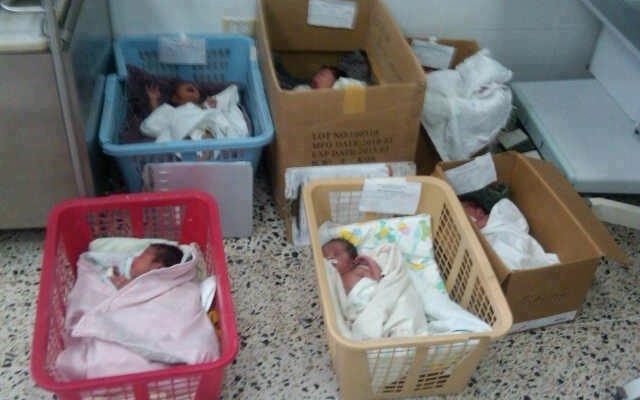 Two years ago, the  Guardian described how Venezuela’s devastating economic downturn was ravaging its hospitals. Since then, things have only gotten worse. Much worse.

The New York Times reported at the end of last year that in Venezuela today,  hunger is killing the nation’s children at an alarming rate. The Times team tracked 21 public hospitals in Venezuela. The paper reported that doctors were seeing record numbers of children with severe malnutrition. More alarmingly, in the same piece, the Times reported that hundreds of children had already died. And children continue to die.

The most needed medicines have disappeared in Venezuela. Millions of Venezuelan citizens have had to flee their country, and as the diaspora widens, Venezuelans in their thousands continue to exit Venezuela daily. Venezuelans are walking to cities and towns in Colombia, journeys of hundreds of miles, wearing nothing more than flip-flops on their feet.

Meanwhile, Venezuelan President Maduro was videotaped and photographed last week living high on the hog in Istanbul, Turkey, smoking a cigar, enjoying $400 beef and chitchatting with and cozying up to the executive chef Salt Bae at one of the most expensive restaurants in the world. The video went viral, and immediately, not just in Venezuela, but around the world garnered the indignation that it deserved.

Just in August of this year, Maduro – and economist he is not – announced an unprecedented increase in the minimum wage to 180 of his newly invented currency, Bolívares soberanos (Sovereign Bolivars). In his attempt to keep pace with the hyperinflation that he himself has created (this is his 23rd or 24th – it’s hard to keep track – increase in the minimum wage over the past 6 years), Maduro announced that from September 1st of this year the minimum wage in Venezuela would now be the equivalent of $18 US per month.

Forget Venezuelan, Latin American-rooted thinking in the above sentence for just a minute. Magic formula is the pivotal key concept in his pronouncement.

The President of a 30 million+ population is trying to sell his citizens on the miracle of snake oil, on a medicine show that was commonplace centuries ago and whose overenthusiastic misstatements have been disgraced thousands of times since. Maduro wants no more and no less than that his citizens buy into a false cure of what ails Venezuela.

$18 per month is a 35-fold increase from the 50¢ conversion-rate adjusted minimum monthly wage that Venezuelans were guaranteed in just August of this year. It sounds like a huge increment, until you realize that the International Monetary Fund is predicting a 1,000,000 percent increase in the inflation rate in Venezuela by December. And a one-million percent inflation rate applied to $18 is such an infinitesimal amount that it won’t even show up on your calculator. Rest assured that there will be a 25th and a 26th, and perhaps even a 27th and 28th increase in the minimum wage before the end of this year. If it happens, it means nothing. And if it doesn’t happen, $18 per month is still just $18 per month for life’s necessities.

Unable to pay a 35-time increase in the minimum wage for their employees, business owners across Venezuela have reacted to Maduro’s latest proposal by letting longtime employees go, and by closing down their stores or businesses completely.

The result of this new Maduro policy is that there are now many more Venezuelans out of work and without the basic resources for daily life in Venezuela than there were just 30 or so days ago. With Maduro’s latest initiatives, the number of Venezuelans needing to leave Venezuela and take their chances in a completely unknown life abroad has increased exponentially.

Those of us who live outside Venezuela are observers of a situation that is inhumane and cruel beyond belief. We are witnessing a humanitarian crisis unfold in the Americas like none before. And we have to ask ourselves What can be done? How can we help?

Here are some suggestions as to how we can help our neighbors just south of Key West right now.

The Venezuelan Society of Palliative Medicine collects medicines to help those in Venezuela without resources. The specific goal is to help in the treatment of patients with chronic diseases.

Programa de Ayuda Humanitaria para Venezuela accepts financial donations via PayPal, and also accepts donations of medicines and food in Florida and Puerto Rico. You can see a complete list of drop-off locations or contact numbers here – and scrolling down the page you will find a useful list of hard-to-find medicines in Venezuela.

Cuatro por Venezuela works to provide help in the areas of health, nutrition and education. The organization partners with 74 hospitals and institutions in more than 14 Venezuelan states to help provide food to senior citizens and children facing hunger.

Chamos is a UK-based non-profit focused on the needs of Venezuelan children through education and healthcare programs going forward.

In July 2018, WPLG in Miami ran a piece on how to be more immediately involved with the Catholic organizations offering assistance to those arriving in Cúcuta, Colombia daily. Cúcuta, Colombia is the gateway to the world for the vast majority of Venezuelans leaving Venezuela. Among WPLG’s suggestions are these:

The Scalabrini International Migration Network runs a center, or “casa del migrante,” in Cúcuta. They manage several programs including a kitchen responsible for a regular distribution of breakfasts and lunches and a school. For more information, call 011-57-7-573-5533 or email scalabrinicucuta@gmail.com.