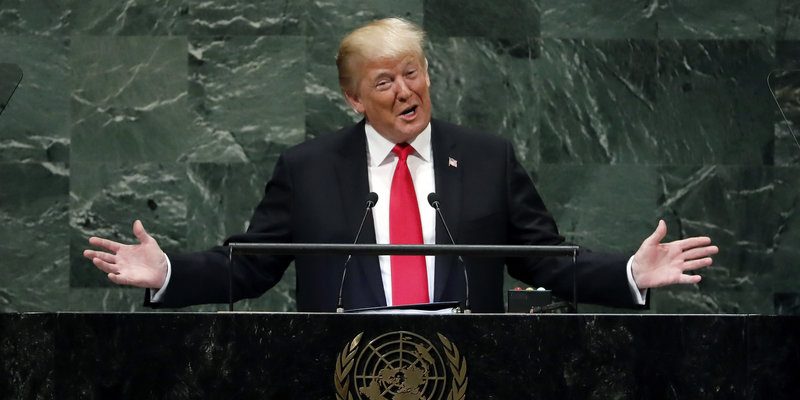 Instead of grieving for the past, or focusing on whether world leaders laughed at or with President Trump at the United Nations, grassroots progressives should be searching for a new deal with the world.

During his visit to the UN in September 2108, the President’s stated vision and priorities for multilateral action got little discussion. While the majority of world leaders used their time at the UN dais to speak of “common threats” and “universal values,” President Trump, for a second year in a row, expounded on the urgency of patriotism, rejecting the multilateral process, the vaulted “ideology of globalism.” This approach is hardly surprising from a leader who campaigned on the promise of “America First.”

Two years into the Trump presidency, we are quick to dismiss the President’s rhetoric as mere theatrics. Yet, his vision of the world, greatly influenced by veteran war-hawks around him such as the current National Security Advisor John Bolton, currently set the tone of U.S. foreign policy. They shape America’s relations with its neighbors and overseas nations alike, and in turn the safety, well-being and prosperity of Americans at home.

Few question the current state of affairs on the foreign policy front. Many have accepted it as a part of the ongoing reality show that the American political process has become. Others grieve for the past administration which, in its dealings with foreign nations and multilateral institutions, typically called on America’s better angels. We would be better off searching for new ideas about alternative means of American engagement with the world — a sort of New Deal with the world.

Historians are quick to point out that the popular consensus on U.S. foreign policy has undergone little change following the fall of the Berlin Wall, regardless of the party in power. Rather, leaders have mainly prioritized policies with a singularly pro- war, surveillance, and exploitative business focus.

The progressive wing, the mainstream-kind, has rarely dared to challenge the status-quo. Often, they are busy with advocacy on domestic issues. There are also no ongoing robust discussions in the D.C. think-tank circles about alternative U.S. foreign policy practices. The funders for such projects are scarce. According to some reports, there are not even enough policy experts to staff administrations that deviate from the mainstream foreign policy consensus. The American foreign policy elite follows a cookie-cutter approach, namely because most of them came of age in the same institutions of higher-learning.

However, the blueprints for an alternative foreign policy are slowly emerging. They include proposals that would both honor and  advance the ideals of justice upon which the U.S. was founded, and would guarantee the well-being of others and the planet.

These policy proposals are being sketched out by scholars and foreign policy experts. They are also championed by a small group of politicians unafraid to take on the establishment. One of these people is long-term Vermont Senator and former Democratic-party nominee candidate Bernie Sanders.

Earlier this month, Sanders took the spotlight at D.C.’s premier international relations university to outline what some have dubbed, “Bernie’s New Internationalist Vision” for U.S. engagement with the world.

The ideas outlined were less of a battle cry to resist, and instead, a call for a new international movement “to create a decent life for all people.” Standing up to authoritarians of all stripes, controlling unchecked greed and eliminating corrosive corruption is a first step in this endeavor.

Sanders’ political vision has yet to be translated into specific policy proposals. Right now, it would only play well at political rallies. Other progressive elected or aspiring officials have yet to fully come around to this way of thinking and offer their take on how America should conduct its foreign affairs. Though, with a presidential campaign just around the corner, this too might change. The electorate and social movements, preoccupied with domestic resistance struggles, likewise have yet to show genuine concern for or interest in transnational debates. Though, their struggles have often been framed in transnational ideals and with the suffering of marginalized people across the world in mind.

Therefore, this is an opportune time for progressives to get more seriously involved and begin imagining new ways of U.S. engagement in the world. Similar to domestic battles for social justice, American dealings with the world should reflect the aspirations of grassroots progressives: blue-collar workers concerned about climate change; college students calling for justice in Syria; and religious leaders crusading for a reduction of nuclear armaments.

Ultimately, it is these people who will experience the most direct consequences of the country’s foreign policy, whether it’s when their loved ones are sent to war, or when profits drop due to ongoing trade wars, or when crops fail from the lack of sustained global action on climate change.