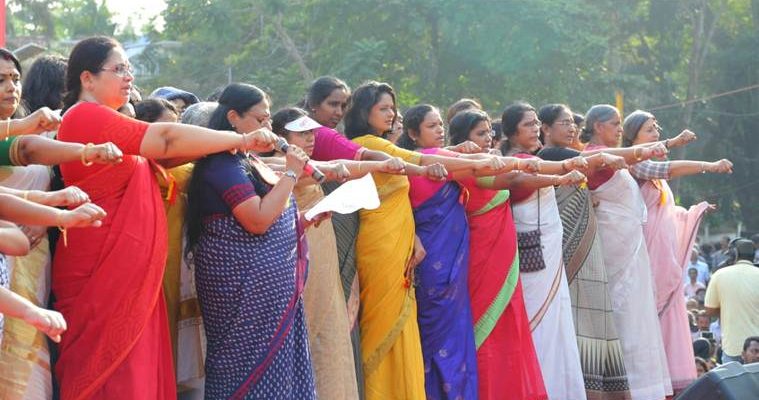 As we in the U.S. watched the federal government shut down because of one man’s fixation on a border-wall boondoggle meant to exclude desperate families fleeing violence and poverty, in the southern Indian state of Kerala, an estimated 3.5 to 5 million women forcefully demonstrated that exclusion is not the only reason to build a wall.

Here’s the story of how millions of brave women came together to demand gender equality, respect, and inclusion by using their bodies as the building blocks to form a 385-mile-long human chain. They called their wall the Vanitha mathil, or the women’s wall.

The story begins in September 2018, when India’s supreme court overturned a centuries-old ban that forbade women of reproductive age from entering the Sabarimala Temple in Kerala. The Sabarimala Temple is an important annual pilgrimage destination for more than a million Hindus. Although the supreme court’s decision was groundbreaking, it failed to alter long-held religious beliefs about the impurity of women’s bodies. It also failed to stop the day-to-day shaming and discrimination of menstruating girls and women—who are forbidden to prepare food or even to step foot in a temple.

Since the ruling, the Hindu nationalist party and religious hardliners have ramped up their intimidation tactics. Female pilgrims have been attacked. Women between the ages of ten and fifty have been prevented from entering the temple. Journalists have been denied access and pushed out of the area. Police charged with protecting female worshipers have been battered with stones.

Women of all ages responded by pulling out their most powerful asset—themselves. Does their response sound familiar to those of you who took to the streets for women’s marches following the 2016 election? Or ran for office in 2018? Or decided to override guilt and shame to speak out about discrimination, intimidation, or sexual assault?

On New Year’s Day 2019, Karala’s women’s wall became the largest gathering of women demonstrating in support of gender equality in India’s history. The next day, two 40-year-old women under police protection entered Sabarimala Temple and offered their prayers. In defiance of the court, after the women left the temple was shut down for a cleansing ritual.

Speaking on behalf of the local government’s intention to uphold the court’s decision and reflecting on the clash of women’s demand for equal treatment and the intransigence of traditional religious beliefs, KK Sahilaja, minister for social justice in Kerala and a participant in the women’s wall, pulled no punches. “We stand for gender equality,” she said. “Those saying that women are impure should be ashamed of themselves. How can they say women are impure in front of God.”

I am not a Hindu, nor do I feel a connection to any religion. But that doesn’t matter. I recognize in the faces of the women and girls of Kerala the same determination of all women to fight for our right to be included.