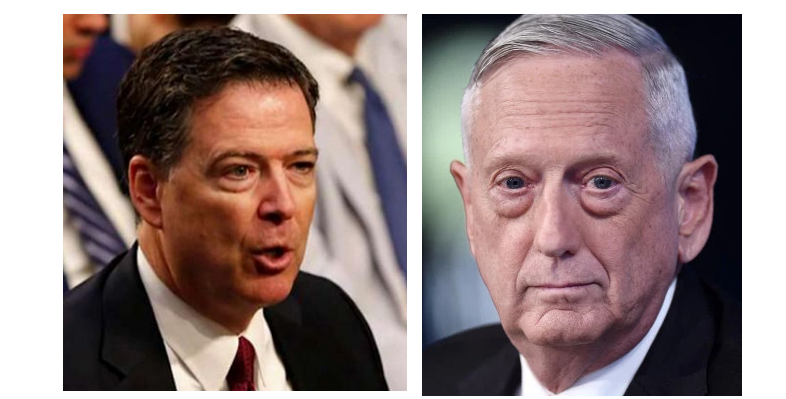 John F. Kennedy’s Pulitzer Prize winning book (with much help from speechwriter Ted Sorensen) , Profiles in Courage, focused on eight white men (yes, no women and no minorities) who stood up for principle at the expense of continuing their political careers. With one exception (James Comey), there seems to be no one who has served the administration of Donald Trump who would remotely qualify as a profile in courage.

Even before Trump was anointed president by the antiquated and anachronistic Electoral College, F.B.I. Director James Comey took unpopular stands in defense of what he thought was right. It was within the jurisdiction of his agency to investigate Former Secretary of State Hillary Clinton’s unconventional method of storing e-mails. Comey was caught between the proverbial rock and the hard place. One option was to stay silent and let Attorney-General Loretta Lynch announce that no indictment would be forthcoming. However, Comey knew that Lynch’s credibility was tainted. She had recently hosted a 30-minute private meeting with Bill Clinton on her plane at the Phoenix airport. With Lynch compromised, Comey took option two, stepping up to say that while there was not sufficient evidence to indict Clinton, her conduct had been “extremely careless.”

He irritated the Clintons and many of their supporters, but his honesty shined through when he recognized that he was in a conundrum and he spoke openly about not having any simple answers.

When Donald Trump became president, Comey utilized the same balanced thinking that made him such a straight shooter with Clinton. If Comey had not previously been aware of Trump’s emotional and mental inadequacies to be president, he learned quickly upon having private meetings in the White House. Donald Trump clearly did not understand the role of the F.B.I., of the Department of Justice, and how the White House related to both. More importantly, Trump gave no indication that his top priority was the well-being of the United States and the world in which we live. Rather it was his personal aggrandizement.

Once Comey met Trump, his primary concern was the well-being of the country. He had the audacity to take contemporaneous notes from his meetings with Trump. Ultimately, he shared them with a friend, who at Comey’s request, leaked to the media. Comey wanted American citizens to know about the dangers that lurked while Donald Trump was president. With this knowledge, he wanted Congress, and possibly the president’s cabinet, to consider legal actions to reduce or eliminate the threat that he presented.

In contrast to Comey, there is a man named Mad Dog. You may know him as former Secretary of Defense James Mattis. He was one of Trump’s original cabinet appointees and by all regards, acquitted himself well at the Pentagon. But by the end of his second year as Secretary, he resigned, saying that he objected to Trump’s precipitous withdrawal of American troops from Syria.

His departure from the Cabinet was very disturbing to those Americans who had serious concerns about Trump. Mattis was considered to be one of the adults in the room. Presumably he could talk truth to power, and if necessary, implement, or not implement, Trump orders in a way that minimized danger to the country.

Once Mattis left the Cabinet, and Trump’s position of Chief of Staff was filled with Trump worshipers, a huge vacuum was evident. There was no one in the higher reaches of government who could straight-talk Trump, and if necessary, leave the administration on principle.

Now we learn that General Mattis has written a book which includes accounts of his service in the Trump Administration. Unfortunately, he fails to include in the book or in any of his recent magazine articles and on-air interviews that Donald Trump was putting America further at risk.

Perhaps Mattis was not the adult in the room who we thought that he was. Perhaps his comfort zone is adhering to military protocol and following the line of his commander-in-chief.

To many “adults outside the room,” it is very disappointing that Mattis has not offered legitimate criticism of Trump. Instead, he is going on to be a lobbyist.

There are many on the left who hold a grudge against James Comey because his actions clearly hurt Hillary Clinton’s chances of becoming president. This may be true, but he stood alone among those who have “served” Donald Trump, because he publicly talked truth to power. Had he not, we probably would not have had a Robert Mueller and all the misdeeds revealed in his investigation. If only Mattis had been a little more like Comey.