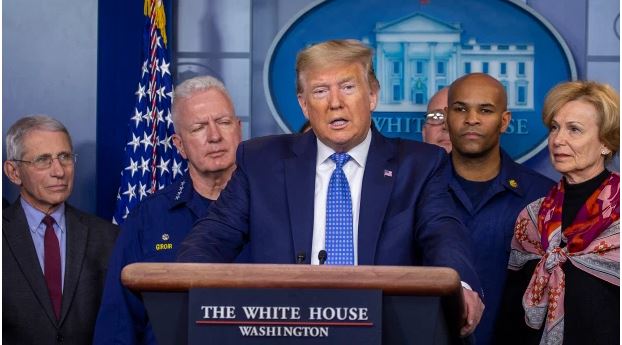 About 6 months into the Trump Presidency, I was ready for it to end. Well actually I was ready for it to end before it even began, but in July of 2017 I started thinking about what that end might look like. I remarked on what seemed like the 12 most plausible endings for Trump’s 1st term. You can read that piece here. A lot has happened in between now and then, the Mueller report came and went, there was the impeachment that wasn’t, we discovered only Trump could go to Korea, and Democrats won the House. However even with so much uncertainty, made worse by a global pandemic, it would seem that there are still a few plausible endings left and it’s worth exploring them further.

“4. Democrats Nominate a “Bad” Candidate: Everyone by now acknowledges the role that Russian interference played in 2016’s presidential election, and had it not been for James Comey’s last minute letter to Congress, Hillary Clinton would almost certainly be President. Now that that’s out of the way…. there’s no excuse for there having been so many undecided voters and Hillary Clinton failing to reach 50% in polling averages at any point after winning the nomination. Maybe it was sexism which ultimately kept Clinton from breaking that highest glass ceiling, but maybe it was something else. I supported Hillary Clinton, but even she would acknowledge that even if she was right on the issues, perhaps she wasn’t the strongest candidate because of perception problems alone. The Democrats have a bad tendency to either over-correct or change nothing when faced with defeats. If the party over-corrects, and takes hard left positions and nominates a candidate who sounds like Eugene Debs, then they’ll end up losing mainstream Democrats. If the party changes nothing, and recreates an Obama era platform and nominates a corporate backed third-way Democrat (I’m looking at you Cuomo), then so-called “Berniecrats” will once again either vote third party or not at all. If he can rely on a continued split in the Democratic Party and lack of loyalty among liberal leaning voters, then re-election is more likely than we’re willing to admit.”

At the moment, Joe Biden appears poised to lead Democrats into the general election (although I’ve still got my eye on Cuomo in case Biden falters). It is apparently bad politics to comment on Biden’s presentation, but politics is mostly presentation as voters are incongruous in their policy preferences. It would seem Biden has lost a step and his disappearing act during the first days of the pandemic was not exactly a profile in courage. When voters challenge him on his policy record he’s called them “fat”, “a lying dog faced pony soldier”, “full of shit”, and told them to “vote for Trump”. Maybe that doesn’t matter and it’s part of his appeal, for some it absolutely is. There are millions of partisan voters who will vote for anyone not named Trump and maybe that will be enough. However maybe it won’t be, in an upcoming piece I’ll explain how Trump will run against Biden and how it could be effective. Regardless, it at least seems plausible especially given rising approval numbers for the President in the face of a national crisis that Biden might not be the candidate for the moment.

“5. Trump Continues to Divide the Country, and it Works: Thanks to an archaic system from the 18th century, Donald Trump doesn’t need to win a majority of votes to be re-elected. Trump’s base has shrunk somewhat from election day until now. The number of Americans who “strongly support” the President has seen a not so insignificant decline. But Trump, for all of his shocking inadequacies not just as a President but like as a human being, has captured the American id. When given an effective foil he’s able to motivate his supporters, whether it was “Low Energy Jeb”, “Little Marco”, “Lyin’ Ted”, “Crooked Hillary”, and ultimately “Fake News”. Donald Trump doesn’t have to accomplish his legislative agenda (it’s so unpopular that perhaps he’s better off if he doesn’t), he can blame all of his failures on the media or Democrats. Let’s also assume that Trump’s support for voter suppression is at least moderately successful, and the restrictions from 2016 are either kept or expanded, that only helps him. It won’t matter if Democrats win in Congress or if the destructive GOP health care becomes law, because Trump is independent of the GOP. Trump doesn’t claim failures, he puts them off on Paul Ryan or Mitch McConnell, and his voters are okay with that. If Trump can manage to continue on his current paths, with no serious deterioration from the present, then he’ll survive another 4 years.”

As of the writing of this article, President Trump’s approval rating according to fivethirtyeight is 45.8% and in the days after his inauguration it was 45.5%. That’s remarkably steady and has been consistent throughout this term, his best approval numbers and his worst are separated by less than 10 points. For context, for Obama and Clinton it was more than 20, for Bush it was more than 40. The President could very well lose the popular vote, perhaps by a larger margin than in 2016, but it may not fundamentally matter. The President is still competitive in the upper Midwest against both Sanders and Biden. Florida seems to be burdened with a less than effective state Democratic party and the great Sunbelt hopes of Arizona and Texas may once again fail to materialize. Voters know how they feel about Trump and it’s mostly static. There has been some cross-over, many well educated and well to do white voters who voted for Romney voted for Democrats in 2018 and a likely equal number of working class voters, especially whites but also Latinos, have put their faith in the President. If nothing has fundamentally changed with voters, then we shouldn’t be surprised if our election results don’t change either.

“7. Republicans Enact Their Agenda, It Goes as Expected: You don’t have to be Larry Sabato to predict what would happen if 22 million people suddenly lost their healthcare. Whether you believe that voters are more receptive to a progressive message or a conservative message is largely irrelevant, because in regard to policy, too much movement in either direction will result in pretty spectacular backlash. Voters don’t want a border wall, they don’t want Medicaid cuts, they don’t want Social Security cuts, they don’t want tax cuts for the rich, they don’t want to cut the EPA, and they don’t want to roll back women’s reproductive freedoms. If Trump goes along signing and supporting every part of the GOP agenda, he’s going to end up motivating democratic voters and demoralizing his would-be voters (literally killing them in the case of the ‘health care’ bill). This assumes Ryan and McConnell are able to whip votes effectively in their respective chambers, which so far they’ve been able to do. The AHCA didn’t actually fail, it was pulled from the floor, and then passed. If the same happens with the Senate version, then we have no reason to believe that this won’t be the expected route of all bills for the next four years.”

The fundamentals of the economy were weak before the pandemic and the pittance that is being billed as relief will not be enough for nearly anyone. This crisis will end, and millions of Americans will be left to pick up the pieces of their lives and wonder how things got so bad. This crisis has exposed the failures of the Trump administration in a tangible way that voters can see with their own eyes. Most people don’t sit down every evening and have Rachel Maddow talk at them for an hour while some former civil liberty abusing intelligence type turned resistance hero gives them “expert analysis”. They spend their waking hours making a living, going to school, or raising a family. That has been disrupted, millions are unemployed, schools are online, and the country is social distancing. People lack access to affordable healthcare now when they need it most and the social safety net has been cut. Will voters blame Trump and the Republicans? It’s hard not to after Trump has taken credit for what was until very recently, positive economic growth. It’s not hard to imagine Trump being punished electorally for the misery of the American people as Hoover, Carter, and Bush sr. were.

“12. President Trump Plunges America into Authoritarianism After a Terrorist Attack: On September 10th, 2001 President George W. Bush’s approval rating sat at 51%. Just a week later his approval rating soared above 80%. In between those two polling periods 9/11 happened and nearly 3,000 Americans died at the hands of radical jihadists. Bush’s approval didn’t dip below 50% for nearly 900 days after the attacks, and during that period Congress passed the USA PATRIOT ACT as well as a number of laws aimed at curbing civil liberties, the Department of Homeland Security was created, and the President was given the authority to go to war in Iraq. America has never been the same, and strangely enough the only thing that might have prevented the country from spiraling into outright authoritarianism was that the people in government, as corrupt and power hungry as they might have been, still had respect for our institutions as well as some principled view of what America should be. That does not exist within the Trump administration. If an attack on the United States occurred on the scale of 9/11, and Trump was able to harness the energy from the rally around the flag effect that would surely follow, dark times would follow. The free press could cease to exist, people could be rounded up and put into camps, Congress might give Trump sweeping authority, and who knows what else. This is a constant threat and we can’t gauge the odds of it happening because terrorism is itself fairly unpredictable. But if it did happen, God help us.”

Coronavirus was the unknown unknown. What is happening in this country is without precedent and our norms are being tested. Postponing an election was impossible until it happened. Halting the machines of industry and purposely challenging capitalism in America was unfathomable, and then it happened. States ordering their citizens to stay in their homes seemed like a scenario possible in some faraway land, and then stay at home orders became more common than not. We are witnessing a massive expansion of executive power that will have consequences. The President has said that he wants the economy to reopen and a return to normalcy (whatever that meant in the Trump era), however this is almost certainly the end of the beginning and not the beginning of the end. The economy is in free fall and infections are increasing at an exponential rate, what would the government do to save the country it governs? I imagine they might do quite a lot and we’ve seen how fear can materialize into policy during war time. President Trump has some authoritarian tendencies, this crisis may bring them to the surface and the country might be forever changed.

A lot can and will happen between now and November, we should be prepared for everything.