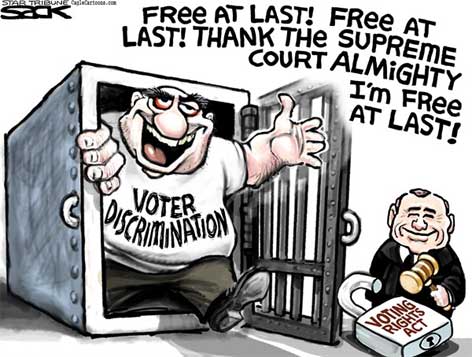 The Supreme Court’s decision in Shelby County v. Holder—to overturn the “pre-clearance” requirement in Section 5 of the Voting Rights Act—continues to have major ramifications for voting rights in America. Just before the decision came down in 2013, The Brennan Center for Democracy looked into its crystal ball and envisioned what would happen if the Court decided against pre-clearance. The predictions were ominous, and, unfortunately, they began to materialize, just days after the Supreme Court’s opinion went live. Here are the general categories into which new voting rights abuses were likely to fall, according to the Brennan Center’s prescient predictions. Check them against what has actually happened. I’m republishing this post because of its continuing relevance in the Trump era of diminishing American democracy.

Jurisdictions could try to revise discriminatory changes blocked by Section 5.

To give you a sense of the scope of this category, consider that 31 such proposed changes have been blocked by the Justice Department or the federal courts since the Voting Rights Act was last reauthorized just eight years ago. In just the past six months, after the 2012 election, many such challenges have been rejected.

Jurisdictions could put in place broad discriminatory practices they were previously “chilled” from implementing by Section 5’s pre-clearance requirement.

In South Carolina v. Holder, a Section 5 challenge that preceded the 2012 election, U.S. District Judge John D. Bates, an appointee of George W. Bush, highlighted the deterrent effect of the statute — how it prevented state lawmakers from moving forward with the most obviously discriminatory practices, and how these officials narrowed the scope of their proposed voting change to track the requirements of the Section. That deterrent effect will be gone.

Jurisdictions might implement those discriminatory practices they tried but failed to get past the Justice Department under Section 5.

The Brennan Center reports that 153 such voting measures have been submitted and then withdrawn in recent years after federal officials questioned the discriminatory nature of these proposed laws. Even if just half of these policies were to be reconsidered and adopted in the absence of Section 5 they would significantly change the voting rights landscape in several Southern states.

Finally, the most obvious impact — jurisdictions might try to adopt restrictive new voting measures they neither contemplated nor dared submit for preclearance under Section 5.

For best effect, those lawmakers could do so on the eve of an election, forcing voting rights advocates to scramble and practically daring the federal judiciary to enjoin the measures. We wouldn’t likely go back to the age, as John Lewis recounted, where black voters would have to guess the number of bubbles in a bar of soap. But we wouldn’t be too far off, either. Just last election cycle, in Texas, lawmakers sought to impose what amounted to a poll tax on indigent — or carless — registered voters.

If you think these predictions sound hysterical, Orwellian and unlikely to occur in this country, think again. In the past seven years, states and local jurisdictions enacted legislation on many of the fronts outlined by the Brennan Center. We need to stay on full alert.