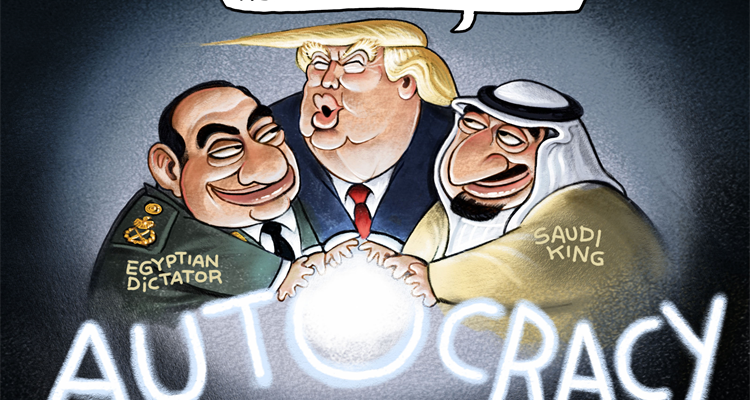 It was another of the many “last straws” in the Trump era. Kyle Murphy, a senior analyst in the US Defense Intelligence Agency, went public with his resignation, appearing on tv news shows and

publishing an op-ed on the highly regarded Just Security site. Murphy said that what he saw in the Trump administration had “grave similarities between events in our country and the processes by which autocratic leaders have brought their countries to the brink of civil conflict and beyond. Each day, Trump’s approach looks more like the autocrats I warned about as an analyst.”

Here is the full text of his powerful op-ed:

I recently resigned as a senior analyst with the Defense Intelligence Agency after experiencing firsthand the actions of U.S. government leaders to suppress nonviolent dissent during the recent nationwide protests for racial justice.

I have seen up close the president’s disdain for democratic values, and recent events should be put in the context of a continuous slide toward authoritarianism. In 2015, I was detailed to the White House as an apolitical civil servant on the National Security Council (NSC) staff. My term was set to conclude in January 2017, but I agreed to extend for two months at the request of NSC leaders to support an orderly transition between administrations. I briefed President Donald Trump before several introductory calls to foreign heads of state, and as is customary, I listened in and prepared the official transcripts. I was appalled by the ways he actively undermined the democratic principles we have long aspired to model and to advance globally.

In my years analyzing foreign political and military decision-making for senior policymakers, part of my job was to observe whether foreign governments protected their national security services from politicization and whether they committed abuses against their own populations. These are critical measures of the health of a democracy, and failures not only disqualify countries from U.S. partnership but also can be a warning sign that a country may play a destabilizing role in the world. Our laws enshrine a fundamental belief that a nation’s security forces should defend, not undermine, the core principles of democracy, and that they are not a leader’s personal tool to silence critics and retain power. Respect for this principle is one of the starkest lines dividing democratic and authoritarian leaders, and I see grave similarities between events in our country and the processes by which autocratic leaders have brought their countries to the brink of civil conflict and beyond.

Each day, Trump’s approach looks more like the autocrats I warned about as an analyst. I am alarmed by the decision to send federal forces to Portland and additional cities, over local objections, as well as the abusive approach of those forces to protesters in operations well beyond their normal jurisdiction. The use of intelligence elements to monitor citizens engaging in constitutionally-protected activity is deeply disturbing and strikingly similar to illegal domestic spying that prompted the Church Committee in 1975 and resulted in our modern intelligence oversight structure. Set against the backdrop of the dereliction and callous disregard for the more than 160,000 Americans who have died from COVID-19, I fear the president and his allies may choose further escalation in an attempt to avoid the personal consequences of defeat in November.

I saw several patterns repeated in the behavior of foreign leaders who lacked majority support and refused to respect their constitutions and constituents. They ignored or manipulated facts, rejected legitimate criticism, sought to disenfranchise opposition voters, invited foreign interference, and planted seeds of doubt about their own institutions and electoral processes. They also identified security elements willing to spy on their own citizens and to use force to put down protests calling for the leader to step down. Sadly, the similarities to current events in the United States are striking.

I have seen up close the president’s disdain for democratic values, and recent events should be put in the context of a continuous slide toward authoritarianism.

But some of the same situations I watched overseas give me reasons to be hopeful. I have seen several authoritarian leaders attempt but ultimately fail to subdue populations deeply committed to advancing democratic values – including Yahya Jammeh in The Gambia and Blaise Compaore in Burkina Faso. In these cases, massive turnout for elections and non-violent protest as part of disciplined and enduring social movements were vital to resetting the course of countries on our current trajectory.

These basic acts of civic participation, undertaken by millions, help rebuild the foundations of democracy and bolster governing institutions against efforts to tear them apart. It is up to all of us to ensure historic and safe participation in this election, and to be prepared to peacefully reject any efforts to subvert the will of the people.