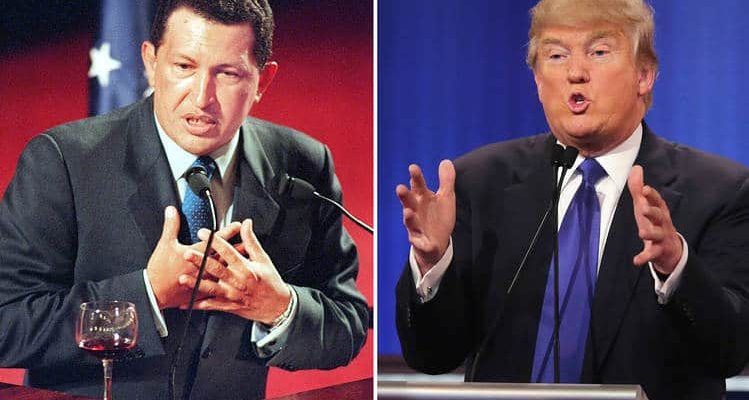 “He based his popularity on his extraordinary charisma, much discretionary   money, and a key and well-tested political message: denouncing the past and  promising a better future for all.”

The Atlantic posted the above quote in 2014, and no they weren’t referring to Trump. The Atlantic was referring to Hugo Chávez, former President of Venezuela. Chávez was a populist president nonpareil who knew just how to manipulate the longings of Venezuela’s working poor in order to recast his country as an ephemeral nirvana. He had the wealth of Venezuela’s vast oil reserves and at the time revenue-producing oil exports to help him realign his country’s values and interests. That realignment has cost the Venezuelan people dearly. Because of severe shortages of the very basics, food, water, electricity, gasoline and money, it’s estimated that more than five million Venezuelans have had no choice but to flee the country. Populist policies can have severe negative long-term consequences.

As we approach the 2020 Presidential election, it might be worth asking, “How did Venezuela get itself into its mess?” Well, through a confluence of historical and social events, but mainly through Venezuelan voters’ decision to elect Hugo Chávez as President in 1999. He stayed on as President until his death in 2013, and set in motion the mess that Venezuela is in today.

How did he get elected in the first place? It turns out that he had charisma.

Merriam Webster defines charisma as “a personal magic of leadership arousing special popular loyalty or enthusiasm for a public figure.” Charisma is a kind of magnetism that, for whatever reason, draws people in. Either you’ve got it, or you don’t. Mitch McConnell has zero charisma. Obama has charisma in abundance, Hillary Clinton not so much. Biden not a lot either. Kamala Harris does, and how! Pence zilch.

Charisma, it seems, is essential to being a populist leader, though not all charismatic leaders have the desire or mindset to be populists. Even though it wasn’t always so, these days, populism connotes despotic and authoritarian politics. We have or have had populist leaders on the left, Castro in Cuba and Chávez in Venezuela among them, and those on the right, Turkey’s Erdoğan, Brazil’s Bolsonaro, Duterte in the Philippines, and our very own authoritarian media-celebrity Trump. And populism is nothing new. Argentina had Perón for a long period of time. Argentina is still reeling in economic havoc from Perón’s populist input in the 1950’s.

Thump, to his followers, is charismatic. No matter that his popularity stems from people’s scattershot knowledge of him as a TV personality, a sort of Kardashian presence in our collective consciousness, he has presence when he speaks in public. He has the ability to embody the charisma of himself as a self-styled outsider. It turns out that that was enough to get him elected. And that was enough to make him the poster boy of the Republican Party. To be a populist leader, you need to be able to convince and impress your followers with preposterous promises. “We will build a wall! We will replace Obamacare! We will make America great again!” Four years in, and what do you know; we still have Obamacare, there is no wall, and Thump’s promise to remake America and upgrade its crumbling infrastructure mess of highways, bridges and airports are just Trumpian words blowing about in the winds of a pandemic.

Populist leaders set themselves up as representing the people versus a vague ill-defined elite. The populist leader is always there at just the right moment to pick up the slack and connect the dots to take advantage of people’s longings for true change. Populist leaders get themselves elected by penciling themselves in as representatives of the disenfranchised. You have to be able to pretend to be able to change the world if you ever want to be a populist leader. Populist followers get caught up in the excitement of the pretend moment. And Trump does pretend really well. Until he doesn’t. Put on the spot, Trump is always eager to place the blame, all blame, any blame, elsewhere. He swallows baseless off-the-wall shadow-world ideas and right-wing theories as if they were nectar of the gods. If the pandemic has shown us anything, it has shown us that our Emperor-in-Chief has no clothes.

Frighten, belittle, and ridicule are essential Trump attributes. To attack your opponents is a given in politics. But much as Chávez in Venezuela, Trump has gone way beyond attack to try to frighten, belittle, and ridicule his opponents. Trump is the king of belittling, calling his opponents, and most especially women, by one word pejoratives, Crazy Hillary, Sneaky Dianne (Feinstein,) Goofy Elizabeth (Warren) and now Phony Kamala. His tactics are already tired, documented, and shameless.

But Trump has something that his populist antecedents never had. Trump has Twitter. The app didn’t exist before 2006. Trump is the king of Twitter attack politics. Trump has almost single-handedly rebranded every news story unflattering to him as fake news. It’s an incredible achievement. It turns out that micro blogging suits Trump’s id to a tee. Micro blogging, the compression of ideas into 140 characters, which doubled in 2017 to 280 characters, is something that somehow fits the Trump worldview perfectly. More than 280 characters, which most ideas and points of view demand, doesn’t seem to work for this President. Trump is, after all, a man of small Twitter thoughts.

That doesn’t mean that we shouldn’t take his rants seriously. Other tyrannical despots with bare-bone ideas have done very well for themselves and reduced their countries to shadows and ghosts of their former selves. Look no further than Venezuela, a country just a hop, step and jump to our south, where pensioners now receive less than a dollar per month government assistance to subsist on.