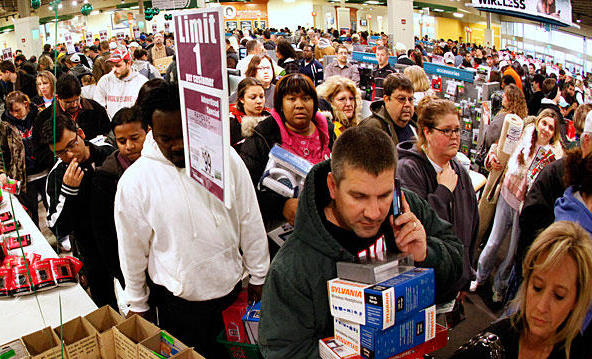 “Black Friday,” the day after Thanksgiving, was a wonderful gift to both retailers and the media. Even before  midnight Thanksgiving night, stores were mobbed with customers engaging in what they saw as bargain shopping. A hyped group of people, particularly when in consumption mode, is a gift to the media. On what other day could a camera crew go into a box store and find someone firing pepper spray at other customers in order to assert his or her right to get to the front of the line?

Most mainstream news outlets like the KISS approach (Keep it Simple, Stupid). So to the, the big stories emanating from Black Friday are huge crowds, once-a-year discounts, unheard-of bargains. The press likes the human interest stories of shoppers who feel compelled to leave their Thanksgiving meals early because they have to “seize the moment” for the bargains.

By Saturday of Thanksgiving weekend, initial sales figures come in. This year they were eye-popping; sales were up a whopping 16% from just a year ago. According to CNN-Money, consumers spent $52.4 billion in one 24 hour period. To put that in perspective, retail sales on one day represented about 8% of the total amount of TARP or the stimulus package of 2009.

Seventy percent of the United States economy consists of retail consumption. On the surface, that’s a very encouraging figure. Store owners, major service providers, almost anyone who has something to sell to consumers profit when there is so much money being transferred from consumers to merchants. But an underlying question exists regarding the permanence of this system.

Is the 70% of the economy that comes from consumer purchasing a renewable resource? Can merchants rest assured that the eye-popping figures from 2011’s “Black Friday” represent a constant stream of dollars available for individuals to utilize to buy flat screen TVs, toys, linens, kitchenware, sweaters, and whatever else catches their fancy this time of year?

The prospects for upcoming “Black Fridays” may not be so encouraging. The reasons are derived from what was happening economically below the surface on “Black Friday,” generally phenomena that the mainstream press does not report. Consider for example:

• What percentage of the items that were sold on “Black Friday” was purchased on credit? Of that amount, how much of it went for goods and/or services that the customer simply could not afford? How many holiday shoppers maxed out on their credit cards and when their next mortgage or rental payment comes due, the only way that they can pay is with checks that are vulcanized (i.e. checks that bounce)? Will they have traded their home for a Merry Christmas?

• How are consumers going to replenish their coffers so that they’ll have money to spend over the next year, including the 2012 version of “Black Friday?” One idea is to go where the money is and follow the practices of Willie Sutton who when, asked why he robbed banks, said that he did it because that’s where they keep the money. It may stand true now that the banks are holding far more than their fair share of our liquid assets, but they seem to prefer to sit on it or distribute it to shareholders and top executives, rather than to make worthwhile loans to individuals and small businesses. The results: less money is in circulation; the multiplier effect is reduced; and the economy further stalls.

• Perhaps most importantly, how can consumption continue at a high level when families’ resources are not being replenished with income from jobs? Businesses have become more effective in saving labor costs by (a) increasing productivity through more use of technology and machinery, and (b) outsourcing jobs to workers in other countries. Unemployment lingers near 9%, and the figure for all workers without a job, as well as those who are too discouraged to continue to look for work and those who are underemployed, the figure is closer to 20%. While not quite as dramatic, I wonder if the media delivering us the havoc of “Black Friday” was broadcasting the same “channel” that Nero was viewing when he watched Rome burn? Did those of us who refrained from playing the “Black Friday” game peer with ghoulish fascination at how the “captains of industry” were manipulating and undermining the very population upon which they rely to prosper?

Since President Franklin Roosevelt, Democrats have embraced the idea of a social and economic safety net. In recent years, Republicans have become more and more skillful in tearing away at the fabric of the net. Some Democrats prefer to trim their sails towards a moderate path rather than exercising the boldness that FDR did.

With the passion and effectiveness of FDR, JFK, and LBJ in his “Great Society” years, we can put America back to work, require banks to share the wealth, and protect consumers from purchasing beyond their means.

To all who enjoyed the thrill of “Black Friday,” we wish you well. If you liked it enough for sales to increase each year, or even remain level, then as a society we have to put in place the structure of a healthy economy that supports consumerism. As is a common theme among progressives, the answer does not lie in the hope of convincing Republicans to embrace the common good. The answer is for Democrats to return to their roots and act as progressives. We’ve done it before; we need to do it again.