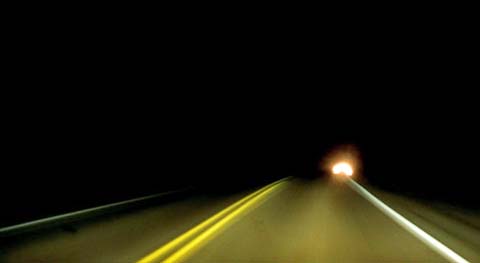 On a rainy, cold, foggy night, we’re driving on I-90 from the Albany, NY airport to a town in rural upstate New York.  My favorite driver—spousal unit 2.0—is at the wheel, struggling to see the lane markings and the edge of the road as we round the curves. There’s not much in the way of illumination, except for strategically placed reflectors. These driving conditions seem trickier than they should be, and I’m thinking that, if this is the condition of the road in mid-November, it’s not going to get any better as winter progresses.

Why is a federally funded, interstate highway in this condition? These are supposed to be the best roads in America, right? The answer, of course, is a shortage of funds for highway maintenance and improvement, caused by the unwillingness of legislators and policymakers to do what needs to be done: levy and collect taxes at a rate that equals the need.

“We’re not charging enough for people to live in this country,” I blurt out to the nice man at the wheel, alluding to my strong, small-d democratic belief that America is a community, with shared public spaces and roads that everyone who can should help take care of by paying their fair share of taxes. In my world view, the less-than-optimal condition of the road we’re traveling stems from an unbalanced tax structure that is failing to produce enough revenue to allow government to do what it’s supposed to do.  That seems obvious.

But then I realize that a different driver or passenger–someone with an alternative political view of the universe—would probably have a completely different reaction to the conditions I’m observing on this highway.

That other someone might say, “Look at this highway. You can’t see where you’re going. There’s not enough lighting. The lane markings are nearly invisible. See, that’s what I’m talking about: Government can’t do anything right, and I don’t want to waste one more dollar of my money on taxes.”

Naturally, I think that this other someone has been suckered in by the propagandists who want nothing less than to enrich themselves through tax breaks and by privatizing government functions as a way of making more profits. Unfortunately, when that other someone buys into the anti-tax message, we all lose, because the privatizers have created a perfect, cynical, self-fulfilling prophecy. It’s a lot like the classic children’s story, “The House that Jack Built,” except in reverse: There’s not enough money for maintenance, so infrastructure crumbles, so people complain about the poor conditions and conclude that government doesn’t work, so they want lower taxes, so there’s not enough money for maintenance…

What’s the solution? I wish I knew. What I do know is that the anti-tax message has been pumped and pimped and primed for so long that it’s going to be very hard to overcome. But if we can’t navigate our way back to a more rational and balanced approach to government funding, the road ahead for our country is going to be downhill all the way.