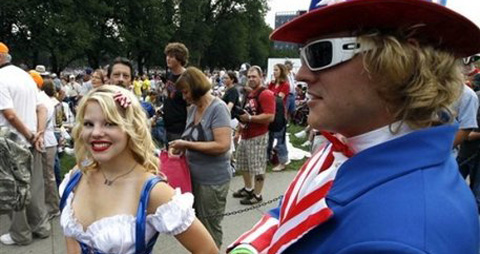 On November 29, Pew Research Center reported that since the 2010 midterm elections, the Tea Party has lost support nationwide and also in the 60 congressional districts represented by members of the House Tea Party Caucus. In what could be good news for Democrats in the upcoming election, the reputation of the Republican Party has declined sharply in Tea Party controlled districts and to a lesser extent across the country at large. It’s not surprising since the movement was never a true grass roots movement, having been conceived by corporate lobbyists as a way to further the interests of the 1%.

In the latest Pew Research Center survey, conducted Nov. 9-14, more Americans say they disagree (27%) than agree (20%) with the Tea Party movement. A year ago, in the wake of the sweeping GOP gains in the midterm elections, the balance of opinion was just the opposite: 27% agreed and 22% disagreed with the Tea Party. At both points, more than half offered no opinion.

Throughout the 2010 election cycle, agreement with the Tea Party far outweighed disagreement in the 60 House districts represented by members of the Congressional Tea Party Caucus. But as is the case nationwide, support has decreased significantly over the past year; now about as many people living in Tea Party districts disagree (23%) as agree (25%) with the Tea Party.