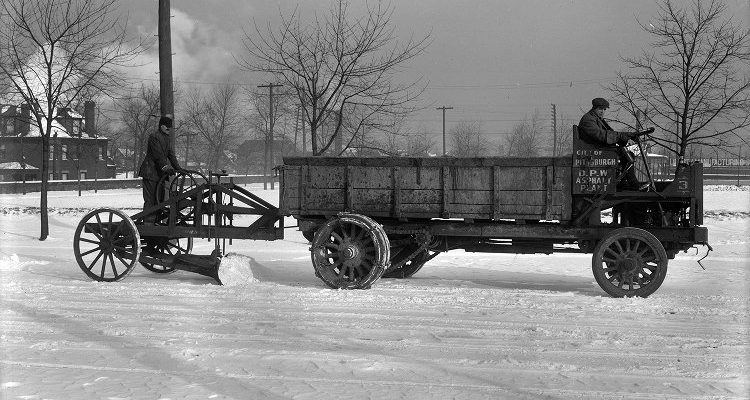 Awakened recently at four and then six in the morning by the clanking and booming of salt trucks and snow plows lumbering outside my windows,  my restless mind wondered how previous generations in the Northeast, where I now live, coped with keeping their lives on track and the roads and byways open during the snowy, bone-chilling days of winters past.

Life was different then—slower and shorter. But not so different that we wouldn’t recognize the same daily challenges of winter, like stocking up on fuel to heat homes, traveling to work, putting food on the table, getting the kids off to school.

Those early-morning, cold-weather musings led me to consider the history of some of the inventions and innovations we often ignore and take for granted, like snow plows and snow clearing.

From historic accounts we know that early settlers of the New World encountered winters that were far more extreme than the winters they’d left behind. Many didn’t survive, but those that did adapted and, ultimately, thrived. The story of coping with snow and its effects on daily living—and even on survival—is the story of the recognition of interdependence, cooperative effort, planning, adaptation, and slow but steady technical innovation.

In late February and early March in the second decade of the eighteenth century, the New England snowstorm that became known as the Great Snow of 1717 dumped four to six feet of snow, with drifts reaching twenty-five feet high. Historic accounts document how townspeople labored collectively to dig tunnels between their homes—tunnels that ultimately lasted until spring melt. Mail delivery, the lifeblood of communities at the time, was nearly halted but resumed when young boys, sloshing over the snow on snowshoes, doggedly made their way through the snow-covered landscape. Life and commerce continued through grit and determination. Shovels, manual labor, and the strength and endurance of sturdy bodies working together were the engines that conquered the snow.

In the era of horse-drawn vehicles and the acceleration of town and city dwelling, snow cover became an asset rather than an obstacle, as horse-drawn wagons and carriages were fitted with ski- like runners. Like today’s annual ritual of the changing of regular tires to snow tires, in those days it was off with the wheels and on with the runners. This clever adaptation led to one of the first major mechanical innovations—the horse-drawn snow roller, which flattened the snow to enable the runners to glide more smoothly over the surface.

The 1840s saw the first snow-plow patents for horse-drawn plows, the first of which was deployed In Milwaukee in 1862. In larger cities, like New York and Chicago, city planners were slow to understand the effects of snow removal on daily living and commerce. They failed to realize that as snow was plowed and removed from major thoroughfares, the smaller streets and shops were blocked by the resulting mountains of snow. It was only when lawsuits were brought by disgruntled business owners and residents that city planners were forced to deploy horse-drawn carts and hire legions of workers to hand shovel the mounds into the carts for removal.

The blizzard of 1888 encouraged the development of more comprehensive snow-removal plans, foreshadowing the nearly military-like strategic planning and deployment of equipment and personnel of modern times. It was around that time that it finally dawned on officials in towns and cities that plowing couldn’t be delayed until the storms had passed but needed to start as the storms began. The twentieth century saw accelerated experimentation and greater strides in snow removal—experiments such as the failed attempts to attach plows to electric trolleys. More successful strategies, however, were on the way. In 1913, New York City developed the first motorized dump truck. In the 1920s, Chicago introduced a snow loader that was equipped with a giant scoop and conveyor belt.

In the second half of the twentieth century, with the innovations of space travel snow removal was transformed with the advent of satellites that allowed for more accurate forecasting that encouraged better and earlier planning.