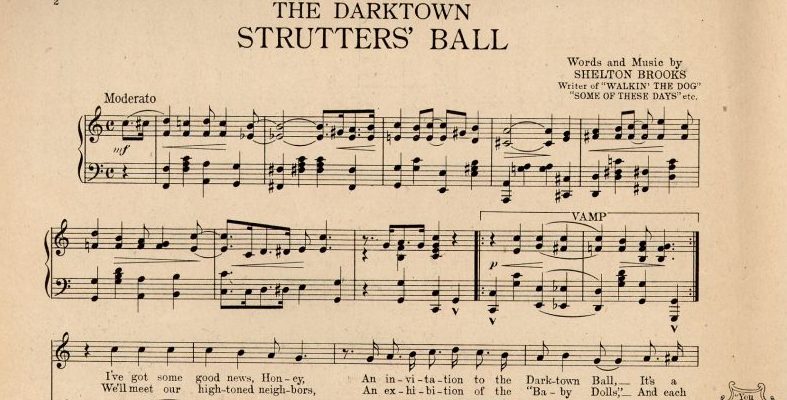 Visiting Montgomery, Alabama to see the civil rights sites, we walked over to the old train station along the riverfront. Inside what appears to have once been the baggage room, we learned that it is now the site of a guitar shop. As we entered, we encountered a group of about 10 men, sitting in a circle, pleasantly jamming together on an assortment of guitars, mandolins and banjos. Although we began to retreat, feeling that we were intruders, the string players motioned for us to come in and listen. So, we did.

They tuned up, and the leader suggested a song — the name of which we couldn’t hear — and a key. As they began playing, I recognized the tune: “The Darktown Strutters Ball.”

I know. It’s just a song. An old song. A remnant from a very different time. But I couldn’t stop thinking about where we were, and how the song fit in. Right where we were standing was the center of the domestic slave trade of the 19th century — the very railroad station where black people had once been transported and put up for sale. Despite what I thought was historic irony, I reflexively tapped my feet, swayed to the rhythm, and began remembering the words.

Just to jog your memory — or to introduce you to a classic, written in 1915 and performed by just about every ragtime, Dixieland and jazz band on earth since then, plus Dean Martin, Ella Fitzgerald and Fats Domino — below is an antique [early 20th century] recording of it, along with some very interesting video.

Is the title considered a racial slur? Am I over-reacting? The word “darktown” sure sounds pejorative to me. But according to some historians, at the time the song was published, the title referred to a section of Chicago where black people lived. That designation presumably was okay in that era — but perhaps a reflection of the baked-in racism that was prevalent then. [Today, of course, using skin color as a way of defining a neighborhood would be completely unacceptable, and that is probably what I am responding to.]

In “A Short History of ‘Darktown Strutters’ Ball,” author Matt Macucci further explains that “…the song was inspired by an annual ball in Chicago, Illinois, that was ‘a kind of modern equivalent of the medieval carnivals of misrule, financed by wealthy society folk but with a guest list of pimps and prostitutes.’

“The “Darktown Ball” was, in fact, a real event:

…but it did not start out as being for the higher classes. It was originated by the ladies of the evening in the Darktown area of Chicago. They decided to create the ball as their way of showing that, for at least 1 night per year, they were just as good as everyone else. It was by invitation only and, over time, became THE most sought after ticket. Even the Major of Chicago could not attend without an invitation.

The composer was Shelton Brooks, a black man who was celebrating the event and the fact that it had become such an important part of the city’s history.

So, singing that song in the Montgomery railroad station — is that insensitive, ironic and further evidence of racism so inbred into our culture that we don’t even see — or hear — it?  Or is it just an innocent celebration of a very popular song from the early jazz era? It’s a complicated question, for which I have no answer.

Enjoy the song. Read the lyrics. Cringe at the imagery.