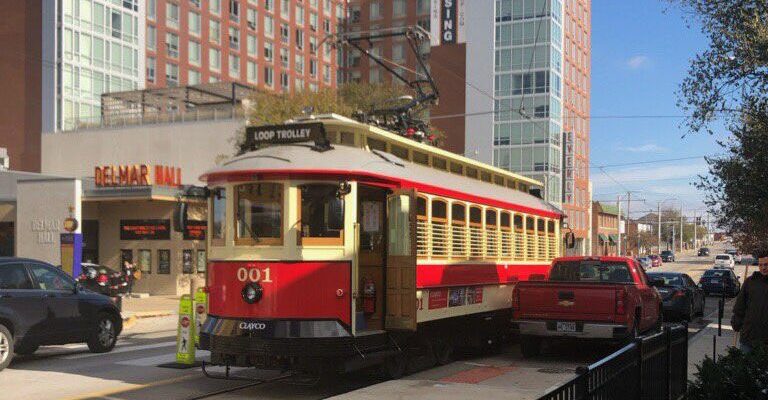 I wrote most of this essay on the day (12/29/2019) of the last Loop Trolley ride. For those outside of St. Louis, the Delmar Loop is a famous cultural street, connecting University City with the City of St. Louis proper. Revitalized in the late twentieth century primarily by local entrepreneur Joe Edwards, it was voted one of ten “Great Streets in America” by the American Planning Association in 2007.

And the Trolley? Well, the Trolley is, or was…. not so Great. It cost over $50 million, of which around $30 million came from federal grants, $4 million came from City tax abatements, and $3 million from the County; its construction caused nightmarish traffic in the Loop, stagnating commerce in the area; and it didn’t really do anything, other than provide a shuttle from the Missouri History Museum to the Loop, which is kind of cool, I guess. The whole thing endured for about a year. Now it’s dead.

In a political ideologies class in my undergraduate degree, I read an essay that so stuck with me that the closing of the Loop Trolley provided an instant connection to it in my mind. Titled “Town Meetings & Workers’ Control: A Story For Socialists” and written by political theorist Michael Walzer in 1978, it is a parable about a man who builds a town, and echoes the present situation of St. Louis governance pretty strongly.

This fictional entrepreneurial fellow, J.J., who, “when the frontier was still somewhere east of the Great Plains…set out to make his fortune.” First, J.J. establishes a ferry at the bend of a river (not unlike St. Louis itself). Taking pioneers from one bank to the other earns him some wealth. He buys up some land in the area and, when settlers arrive, lends them the acres needed to build a church, a blacksmith, and the other necessities of an American frontier town. When Indians attack (a somewhat problematic use of language and example on Walzer’s part), J.J. orders the rifles and gear needed to fend them off. In this way he becomes the informal mayor. When he borrows money from a bank and builds the town hall, he formalizes this role. What was previously a functional economic arrangement becomes a formal political one.

J-town, as the settlement becomes known, prospers. J.J. is the default leader, though “the settlers were not surprised; neither was there any opposition. J.J. was still a gregarious man; he knew them all, talked to them all, always consulted with them about matters of common interest.” J.J. built the town; that he would own it made a sort of sense. Years pass.

Growth requires a degree of formalization, and an elderly J.J. is obliged to appoint other town officers. In an act of hubris, he makes his idiot son chief of police. It is at this point that the citizens stage an electoral revolt. Here’s the crux of the arguments: J.J. is appreciated by all for his leadership of the early town. But this role only entitles him to “honor and glory, but not to obedience.” The citizens are workers, after all. They were the ones who built and operated the business J.J. arranged, and more to the point, his poor governance impacts their lives. The revolt is successful, and the town moves from informal and lax capitalist dictatorship to formalized workers’ democracy. The moral of the parable, writes Walzer, is that “what touches all should be decided by all”. If it will impact you, you should have a say in it. This could be the thesis statement of the entire socialist movement.

Back to St. Louis, with apologies for the diversion. Joe Edwards is our own local J.J. He is widely recognized and positively acknowledged as the man who built the Loop via his ownership and/or support of fruitful businesses like Blueberry Hill. St. Louis Magazine even called him the “Duke of Delmar”. But not all of his ideas have been so brilliant. Edwards has long been a supporter of installing the trolley system in the Loop. Whether or not such a plan could have been viable, its real-world implementation was not, costing taxpayers millions and providing neither increased tourism nor much of a public good.

Joe isn’t alone in St. Louis-area publicly-funded foibles. Consider, for instance, the public opposition to a Major League Soccer stadium over the past few years, which would have involved tens of millions of dollars in public funds. When the proposal was defeated, the organizers began a plan to create a stadium without spending state and local treasure. And a more recent example, the proposed privatization of Lambert International Airport, was defeated by local groups like Don’t Sell Our Airport and the St. Louis Democratic Socialists of America chapter. One might point to these as examples of the system working: A public vote defeated the MLS stadium proposal, and public opposition defeated the airport privatization plan, led by multimillionaire Republican investor Rex Sinquefield, a man with all Joe Edwards’ defects and none of his virtues. But the system clearly didn’t stop the Loop Trolley, and we’re all poorer and worse off for it.

My opposition to these projects doesn’t come from the fiscal conservative’s impulse to save money in the public treasury. Rather, I use the leftist’s critique that instead of playgrounds and attractions for the professional managerial classes, the money should be spent on social services, the homeless, jobs programs, desperately-needed police reform, and greening the city. I think much of the electorate knows this. Imagine if their representatives on the Board of Alderman and the local Democratic Party weren’t mostly weak shills for property developers and investors. Better yet, imagine if the electorate could determine where the money went themselves. Imagine, in short, a community where what touches all is decided by all.

P.S. The Trolley broke down on its final ride in front of Joe Edwards’ Peacock Loop Diner. On a thematically-related note, when Edwards rolled out plans for the diner in 2013, he said he chose the name because “everybody likes [peacocks]—I don’t think anyone has a bad thing to say about a peacock.” Amazing.