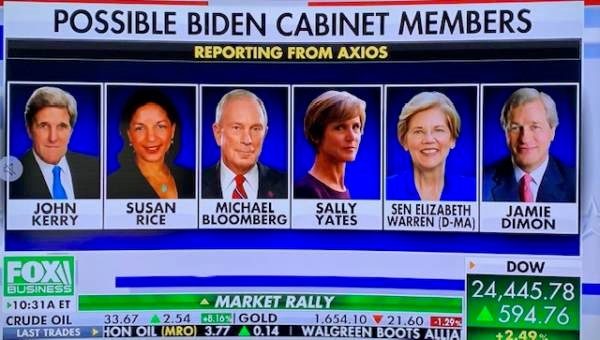 There were over seventy million Americans who voted for Donald Trump. They will not simply go away. If Biden supporters condemn them, it will only raise the Trumpsters’ ire. Liberals need to develop new strategies to reach the Trump voters with the hope they will over time see the benefits that can accrue from progressive policies. It will take a whole new strategy from what most Democrats have tried to date. Central to this approach will be for Democrats to embrace alienated poor white citizens as an essential part of the party; a collection of citizens whose agenda is as important as any other identity group.

Joe Biden can help himself, the party, and the American people by taking a radical approach to filling certain cabinet positions. Key to this will be filling certain positions with “real people;” the kind of individuals with whom alienated poor white voters, and many others, can easily relate.

This would not work for every cabinet position; clearly the Secretary of Energy must be a scientist and the Secretary of State must have an extensive history of studying foreign affairs and traveling abroad.

There are several reasons why I suggest that wherever possible Biden’s cabinet nominees be from the grass roots. Clearly, not everyone in the grass roots would be capable of being a cabinet member. However, throughout the country, there are very thoughtful well-read individuals doing regular jobs who have ideas for reform that would truly advance the condition of people in their profession.

There are people in the trenches of fields like education, labor and agriculture who clearly know best what the current challenges are. They have ideas on what the federal government can do to improve their industry, including the people who work in it and who are served by it. This person may not have had a great deal of administrative experience, but she could have the necessary skills and personal attributes to develop strategies to help others in the grass roots. Naturally, they will have to hire assistants who are skilled managers as well as savvy budgetary gurus.

In addition to skilled grass roots individual making excellent cabinet members, there is another reason to take this approach. Political observers have recently been drilling down to learn why so many members of the Trump base do not like Democrats. For many Trumpsters, it is their disdain for and their separation from the so-called meritocracy.

What is the meritocracy and who are these people? The meritocracy is those people whose standing in life is determined by their professional credentialed achievements. They are the architects, doctors, lawyers, scientists, teachers, city planners, university professors, journalists – the people who ascended to their positions by doing well in school, scoring well on standardized tests, doing what was necessary to make it through college, and in some cases, learned a few things along the way. To many Americans, these professionals are the backbone of our society, the real strength of the American populace. But to a multitude of Trumpsters; these are the people who have had unfair advantages in life, and live in a cloud in which they can neither see the Trumpsters nor care about them.

Those in the meritocracy have high standing in our society. Their prestige is at a level far above the auto-worker, the warehouse worker at Amazon, the bagger at the grocery store, the clerk at the dry cleaners.

In the world of the meritocracy, others within the clique are to be greatly admired and respected. But in the world of the Trump base, these “achievers” are the “others;” the people who got all the breaks in life.

Those who are traditional achievers may say that they deserve everything that they have, in work, wealth and status. In the traditional way of looking at human achievement, they are spot on. But by viewing their achievements this way, they alienate those who have not made it to the level that those in the meritocracy have reached.

If we are going to achieve a greater modicum of unity in this country, we are going to have to find ways to respect where each of us stands. It’s not just a matter of accepting where others are. It is a realization that each of us has achieved, or in some cases not achieved, because of factors which go beyond the content of our character. They involve the status of the family in which we were born and other factors of luck.

If you are religious, you would say “there but for the grace of God go I.” If you’re not religious, you might say that some get better breaks than others.

Humanizing cabinet selections is a great way to start. A family farmer knows well how he is constantly under pressure from agri-businesses to sell his land and essentially become a tenant farmer. This family farmer needs more protection for his family and thousands of others who retain independent entrepreneurs in America’s first industry. Putting a family farmer in the cabinet would go a long way in preserving a competitive economy and strengthening American culture.

A teacher who has not aspired to move up the bureaucratic ladder, but instead to stay in the classroom, may have the most innovative ideas for improving education. Why not appoint her to be Secretary of Education and help her bring in a team of innovative administrators.

An auto worker who does not know from one day to the next if her plant will be shut could bring excellent insight to the Department of Labor. She would personally be impacted by job transitions, and could provide innovative ideas that would allow herself and her fellow workers to continue to have gainful employment if their plants shut down.

Not only could grass-roots workers make excellent Cabinet secretaries, but they would represent extending a hand to many Trump voters. Biden would bring into government people “like them” who would have a better chance to understand their challenges, frustrations, and opportunities for advancement.

We know Joe Biden will innovate. Bringing some “regular Joes and Janes” into the Cabinet would be a great way to advance the country and open the eyes of Trumpsters to what Democrats can do for them.